A Boom in Gun Sales Also Means This

A Boom in Gun Sales Also Means This

Last year, an estimated 8.4 million Americans became new gun owners as the FBI’s National Instant Criminal Background Check System (NICS) logged over 21 million background checks for the likely sales of firearms. Gun sales in 2020, in fact, surpassed 2019’s totals by 60%, and the previous record, set in 2016, by 34%. Demand for ammunition has also been so robust that manufacturers haven’t been able to keep up.

A significant portion of these sales, no doubt, stem from threats of coming gun control from President Joe Biden, a politician who called gun makers the “enemy” and who wants another “assault-weapons” ban and much more.

But the sunny side of the boom in gun sales isn’t just that more Americans are learning about this freedom with hands-on experience, though there are a lot of good things to say about that. This surge also translates into a boon for conservation and recreational shooting facilities.

The legal mechanism that funds this is the Federal Aid in Wildlife Restoration Act, more commonly known as the Pittman-Robertson Act (P-R), which became law in 1937, after the firearms and ammunition industry, sportsmen and others asked Congress to help dwindling wildlife species.

The result was P-R, an excise tax on the sale of firearms and ammunition products. The tax money from this program must be apportioned to state wildlife agencies for conservation efforts, hunter education and shooting-related projects and programs.

The tax is currently administered by the Alcohol and Tobacco Tax and Trade Bureau in the U.S. Department of the Treasury, which turns over the funds to the U.S. Fish and Wildlife Service (USFWS), who then administer it via a special account called the Wildlife Restoration Trust Fund.

P-R funds are made available to states and territories the year following their collection. Since 1937, P-R has raised $13.3 billion for various projects, with nearly $1 billion generated in 2019 alone. The true impact, however, is many times larger, as P-R funding is matched by state agencies and various conservation organizations for specific projects.

According to Jim Curcuruto, a consultant to the hunting and firearms industry, firearm and ammunition manufacturers have paid approximately $3.5 billion in excise taxes on handguns, long guns and ammunition from 2015-2019.

P-R numbers for fiscal year 2020 are still being gathered, and the total contribution to the Wildlife Restoration Trust Fund for 2020 will not be known for several months. Still, Curcuruto said that based on the sales numbers he has seen, he expects an additional $100 million in P-R excise taxes during the second half of 2020 over 2019, which would put the full 2020 tally at more than $710 million. 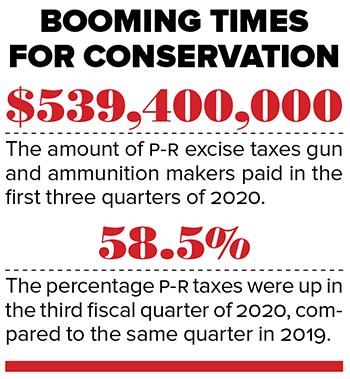 Approximately 75% of the excise taxes on guns and ammo comes from non-hunting related purchases. State wildlife agencies often utilize these excise tax funds to build or enhance target-shooting facilities, which will give gun owners even more places to practice and safely enjoy the shooting sports.

Legislatively, recreational shooting got a huge boost with the recent passage of H.R. 1222, the Target Practice and Marksmanship Training Support Act, more commonly referred to as the “Range Bill.” Signed into law by President Donald Trump in 2019, the Range Bill made it much easier for state wildlife and resource management agencies to have greater flexibility to use P-R funds to improve existing recreational shooting ranges and build new ones; for example, thanks to this legislation, states now have more time for construction and improvement projects, which is crucial when navigating the approvals for acquiring lands, permits and approvals for projects.

Additionally, states are now required to have only a 10% down payment for projects, instead of the 25% previously mandated. So, if a state wildlife agency wanted to build a new recreational shooting range costing $1 million, the state would only need to apply $100,000 in state funds to access the remaining $900,000 from P-R funds.

Some projects benefitting from the Range Bill have already started, including:

• A $2.5 million shooting range enhancement at the Mike Commander WMA Shooting Range near Albany, Ga., which is open to the public. The Georgia Department of Natural Resources is enlarging the 200-yard rifle range to 15 positions, while also expanding access to disabled shooters.

• A new $2.25 million public shooting range in Marion, N.C., which will include a 100-yard rifle range, a 25-yard pistol range and a 3D archery course. The land is currently owned by McDowell County, which is partnering with the North Carolina Wildlife Resources Commission to construct this range.

These additional shooting opportunities for the public will enhance and strengthen the Second Amendment by providing more venues for firearms and marksmanship training and hunter education.

So, if a new gun owner, or someone who doesn’t use this constitutional right, asks about shooting, tell them that every time they hear a gun go bang, they are also hearing a cha-ching for conservation and American recreation.

President’s Column | Will Civility Ever Return? Is The Rule Of Law Still Alive? | An Official Journal Of The NRA

6 Terrible Shooting Practices to Avoid in the Backwoods | NRA Family

END_OF_DOCUMENT_TOKEN_TO_BE_REPLACED

Here’s a brief look at five things in the ban on so-called "assault weapons" that you might not have been aware were included in the legislation.

While some good things were heard, there was also a lot of bad.

The proposed legislation didn’t work 30 years ago and, if history is any indicator, it wouldn’t this time.

If you’re a proud American that supports our military and loves great music, you’ll want to know about a new country group and lifestyle brand, War Hippies.

When the News Becomes Propaganda

Most people think guns are used in a majority of violent crimes. This misunderstanding comes from mainstream-media misinformation.