If you’re getting the impression that armed defense around home is complex beyond what any initial appraisal might have indicated, we’re in emphatic agreement. In an odd way, being out and about has both rules/laws and decorum that narrow “cans” and “can’ts” in a way that just being around the house may not. Slathered over that are the higher stakes of any engagement at home: The well-being of proximate family is worry numero uno, but the increased difficulty of flight, safe-but-accessible firearms and the tendency to go Condition White are high on the list too.

You might well have hoped we were out of such groan inducers, but sadly, we are not. Worse yet—or best, if you’re an eyes-wide-open, fully engaged sort—this installment isn’t a stroll through arcane weeds. If handled wrong, this conundrum carries consequences that are ghastly almost beyond imagination.

We start with (what we hope is) a familiar rule: Know your target, and what is beyond it. It is no leap to see where the dependent clause intersects with our discussion of materials, and the importance of hitting what you shoot at—if you decide to shoot at all. Finding a way to not shoot is preferable, of course. If you can retire from, or otherwise defuse any situation without pressing the trigger, well done.

The independent clause, however, is our focus at present: Know your target. Especially in the last 20 years, there’s been an unhelpful commingling of technologies that tend to submerge the singular importance of that determination. In no particular order, we’ll illustrate why they’re subordinate to knowing a target is, in fact, a target. 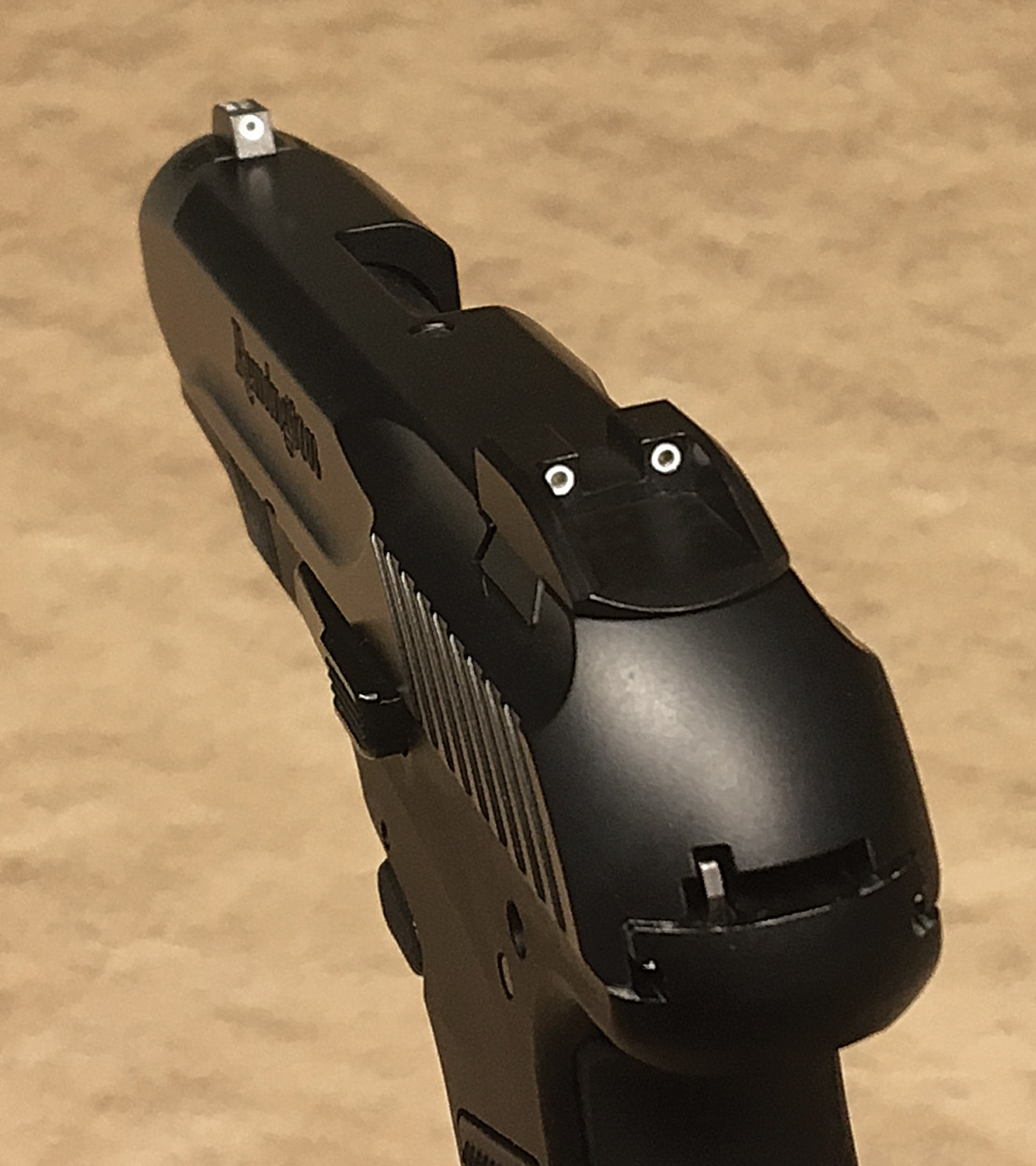 The R51 points unusually well anyway, but a pair of Trijicons pick up rapidly in nearly any degree of gloom. Photo by A1F Staff

An easy “number one” in terms of “Do I need …” questions relates to tritium or other self-luminous sights. Unhelpfully, a case can be made for either a flat “yes” or “no,” and there’s gobbledygook aplenty in between. What the luminous varieties do very well is allow you to align front and rear sight in poor ambient light. This may be a big deal if your defensive shot requires precision—and in general terms, we’d say each and every defensive shot screams for such. But these sights won’t generally help a whit if you don’t already have the skills that underlie precise shot placement in the first place—good light or bad.

Where folks get into trouble with these sights is more likely to be a matter of mindset, since they do nothing whatever to directly improve or aid target identification. As with any other trigger press, it remains your responsibility to see that any enhanced speed of alignment doesn’t get transmogrified into an unjustified shot.

For our own part, we use them, and much prefer them to black-on-black. But they demand ingrained trigger discipline (off target, off trigger) to prevent that “urgency coefficient” from sneaking in. We particularly approve of the varieties that provide good daylight visibility too (a shortcoming in virtually all earlier designs), though not for the reasons you perhaps expect: Agreeable good daylight or otherwise good light are more likely to encourage practice and training with that firearm, which enhances overall facility with that firearm/sights pair. That greater facility engenders faster, more precise deployment, which, in turn, leaves more time—not less—for the all-important target ID.

Cost can be a slightly painful barrier with tritium-lamped sights, but probably shouldn’t be. Our oldest set was still quite useable 10-plus years after install. Modern sets are slightly better in the dark, vastly better in the daylight (carefully chosen, that is) and cost only about $15/year installed if calculated over their lifetime. It’ll seem like a bargain if you ever really need them.

Of course, it’s possible to shoot well and precisely in poor light without illuminated sights too, and sound skills will support almost any variation on notch-and-post. But especially as pages come off the calendar, the luminous varieties may gain appeal and decided utility.

Fiber optic sights have gained tremendous—and well-deserved—popularity in the last decade or so. This adulation is due to their ability to gather available light and direct it back to the shooter’s eyes, giving both a bright-topped post in the corresponding notch, as well as improving the eye/brain’s ability to “track” the sight through recoil and back onto any target. They are comparatively inexpensive, and for the most part versatile and maintainable by the user (go here to get the right size, and you can replace a broken one for about 60 cents). Competition venues are fairly riddled with these (if you haven’t tried some, do). They’re generally a huge improvement over black-on-black in daylight.

Lasers mount easily to a growing number of defensive firearms. Increasingly common rails that vastly simplify and “accurize” the mount process are mostly to thank, but repeated use in films and television hasn’t hurt either. Especially in the last few years, our samples have been rugged and reliable, and battery life for the most part has been unexpectedly good. Lasers range widely in size, and some even fit (damn cleverly!) inside guide rods for semi-auto applications.

But like luminous sights, they don’t replace underlying skills in any way, shape or form. Quite often, in fact, they prove alarming and even disheartening: The media impression of often-unwavering dots and ultra-precise shot placement does not materialize without practice. They also foster looking at the target to see the dot, and this can sabotage considerably the use of any other sighting systems and techniques.

There’s one important exception. It is an ugly reality that defensive encounters occur at bad-breath distances. In circumstances like these, extending your firearm to gain a normal sight alignment and sight picture my also correspond to presenting your firearm to your attacker. At grappling distances, therefore, lasers offer a singular advantage—“Indirect” sighting of a pistol not positioned in front of your eyes/face. A firearm held low and close to the body in a “retention” hold can still place the laser dot on a legitimate aggressive target, and a suitably precise shot can be made. It’s true that a properly setup laser will yield an offset target strike (by roughly an inch on the low side, depending on distance), but this is often accuracy enough in an assault of this emergency proximity.

As a practical matter, remember that shots in this technique must be practiced like any other. Differing angles at elbow and shoulder can deeply compromise the integrity of the platform you are providing for the firearm. While a revolver or auto-loading rifle is likely immune to malfunctions sourced here, we’ve seen many handguns balk from this position, and even the occasional semi-auto shotgun. 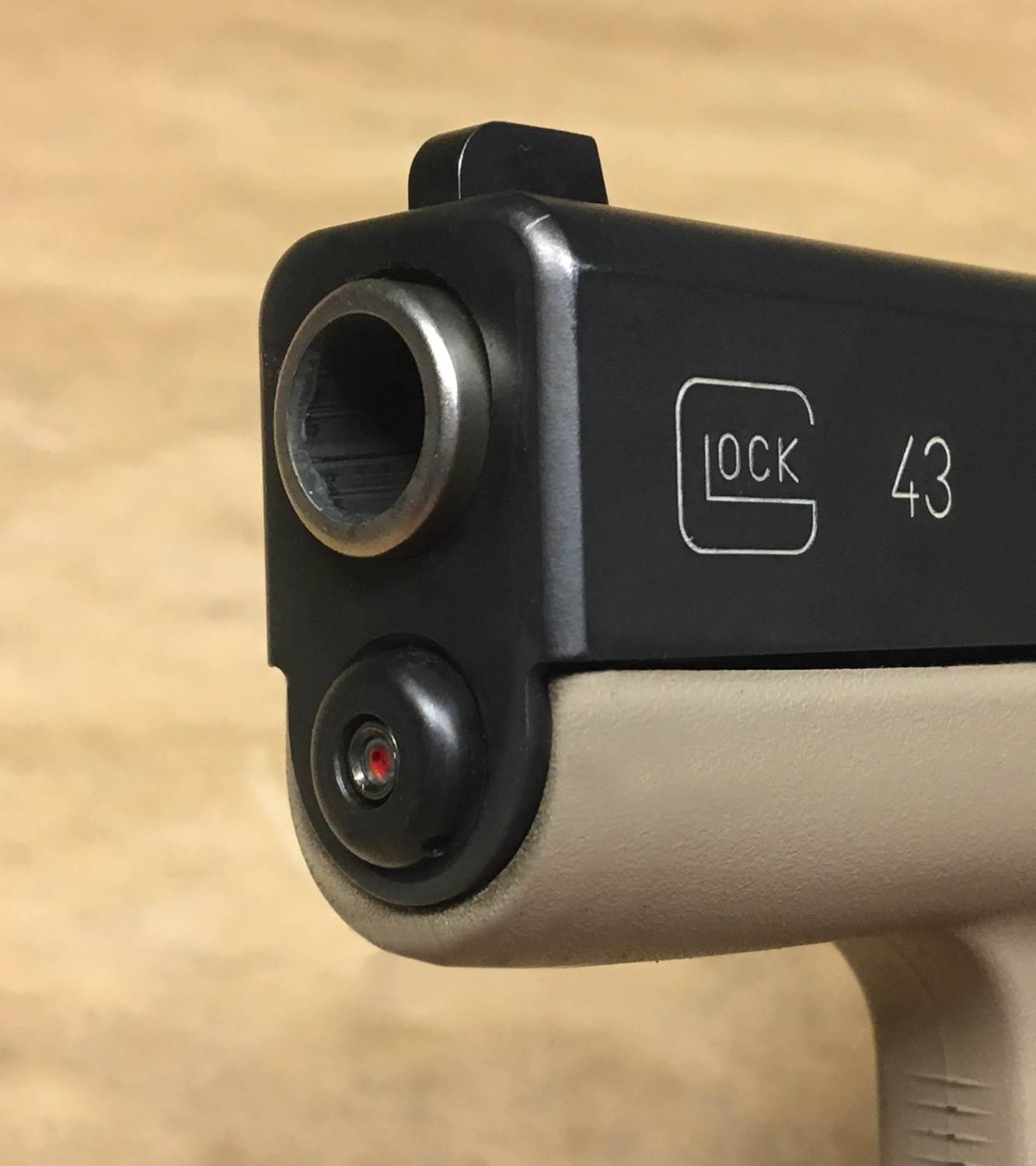 There’s a no-added-bulk laser in this G43. Spot that LaserMax guide rod? That is the front of a Trijicon HD tritium sight set, too; the best of both worlds? Photo by A1F Staff

Be careful practicing such shots, especially at first: You don’t see much of what is essentially “shooting from the hip” because it isn’t easy to do well, is no fun to the point of pain to practice (especially with a shotgun), or both. Note that a considerably lower firing position means the strike of rounds/shot might be higher if center of mass is the aim point; be sure these impacts are still trapped by your berm (outdoors) or bullet “trap” indoors.

A last and admittedly subjective thought on lasers has reached us through both policing and military channels. Silly as it seems, the Hollywood hoodoo in their respect may—gasp!—have actually borne some desirable fruit. It seems that dancing dot (in red or green) is intimidating enough that even the very naughty don’t casually toy with them. Not ever counting on intimidation doesn’t mean you can’t be grateful should it chance to work in your favor.

The key takeaways here are two-fold. In both the moral and legal contexts of carry—“home,” or otherwise—three interesting, mature, well-marketed technologies add essentially nothing to the most crucial problem you hope never to face: Know your target. Only training and practice will pare this apprehension to manageable proportions. But also don’t confuse these thoughts with a blanket, or even selective, condemnation. There is a place for each of these if used within their limitations, and some (like these from Trijicon) have few limitations.

We close the loop by getting back to our (well, the NRA’s) rule: Always, always, always identify a target as a target. Not as a “shape” you didn’t expect. Not as a “shadow” where one did not belong. Not as anything that startles you after out-of-the-ordinary sensory cues that put you in an “alert” or Condition Orange frame of mind. However nifty your technology, you must control it; the responsibility for each and every shot still rests on you, and nowhere more so than at home.

Frank Winn has been studying arms and their relationship to tyranny, meaningful liberty and personal security all his adult life. He has been a firearms safety/shooting instructor for more than 20 years, and earned state, regional and national titles in several competitive disciplines.
In this article
Frank Winn, Carry Life, Home Carry, Weapon Lights, Lasers, Sight, Tritium, Night Sights

The Races That Will Decide Our Freedom

For Beto O’Rourke, Confiscation Is “Perfect”

First Look: XS Sights for HK VP9 OR Pistol | An Official Journal Of The NRA

END_OF_DOCUMENT_TOKEN_TO_BE_REPLACED

This Mayor Says It’s Easier to Buy Guns Than Apples

Whether through willful ignorance or outright dishonesty, anti-Second Amendment politicians get the facts wrong all the time. Some lies, however, are so obviously false they are just embarrassing.

Americans are tired of being told there is no such thing as a "good guy with a gun." What took place in Indiana proves the opposite.

For Beto O’Rourke, Confiscation Is “Perfect”

In his quest to head the Lone Star State, Beto O’Rourke was forced to roll back some of his confiscatory ambitions—sort of.

Deputy Tyler Thoman of the Brevard County, Fla., Sheriff’s Department has been selected as the 2021 NRA Law Enforcement Officer of the Year for exhibiting outstanding bravery and courage while facing an armed and violent suspect during a traffic stop.

Our right to bear arms, enshrined in the Second Amendment, is being challenged by those who know little or nothing about firearms or, worse, simply want to trample on the Constitution and everything that it stands for.

Springfield Armory’s XD 45: The Wiley Clapp Review | An Official Journal Of The NRA