Carry Life had the recent benefit of taking a three-day red-dot specific shooting course with, perhaps, the expert on the topic—Gabe Suarez of Suarez International. We observed in the first installment that it was a profoundly drinking-from-the-fire hose sort of experience, and that sensation has not lessened in the intervening days. There was certainly a lot to learn—whether we did so or not remains to be seen.

Our previous installment had a lot to say about the technology of red dots as applied to sighting in general and applications to the Carry Life in specific. It was useful, we hope, and especially in the sense that “dotting” a favorite defensive/carry pistol is no longer experimental. Ruggedness, battery life and viable technique are facts, and doubting them is simply retrogression. We’d stop short of saying they are “for” everybody at the exclusion of all other technologies, just as we think Suarez would, but we also endorse his idea that not to use them might be a substantial disadvantage. It’s also a good place to get his unfiltered expertise as we promised.

America’s 1st Freedom: Thanks for taking time to give us a debrief, if you will, on the red-dot course. Wrap up the technology aspect from last week a little, if you could? We want to make sure we didn’t miss something Carry Lifers ought to have clear in their heads.

Gabe Suarez: I can’t think of anything that was missed, exactly, but a couple of things that range work ties to the theory and practice are worth reiterating. One is that the combination of quality red-dot and conventional sights are important for several reasons. 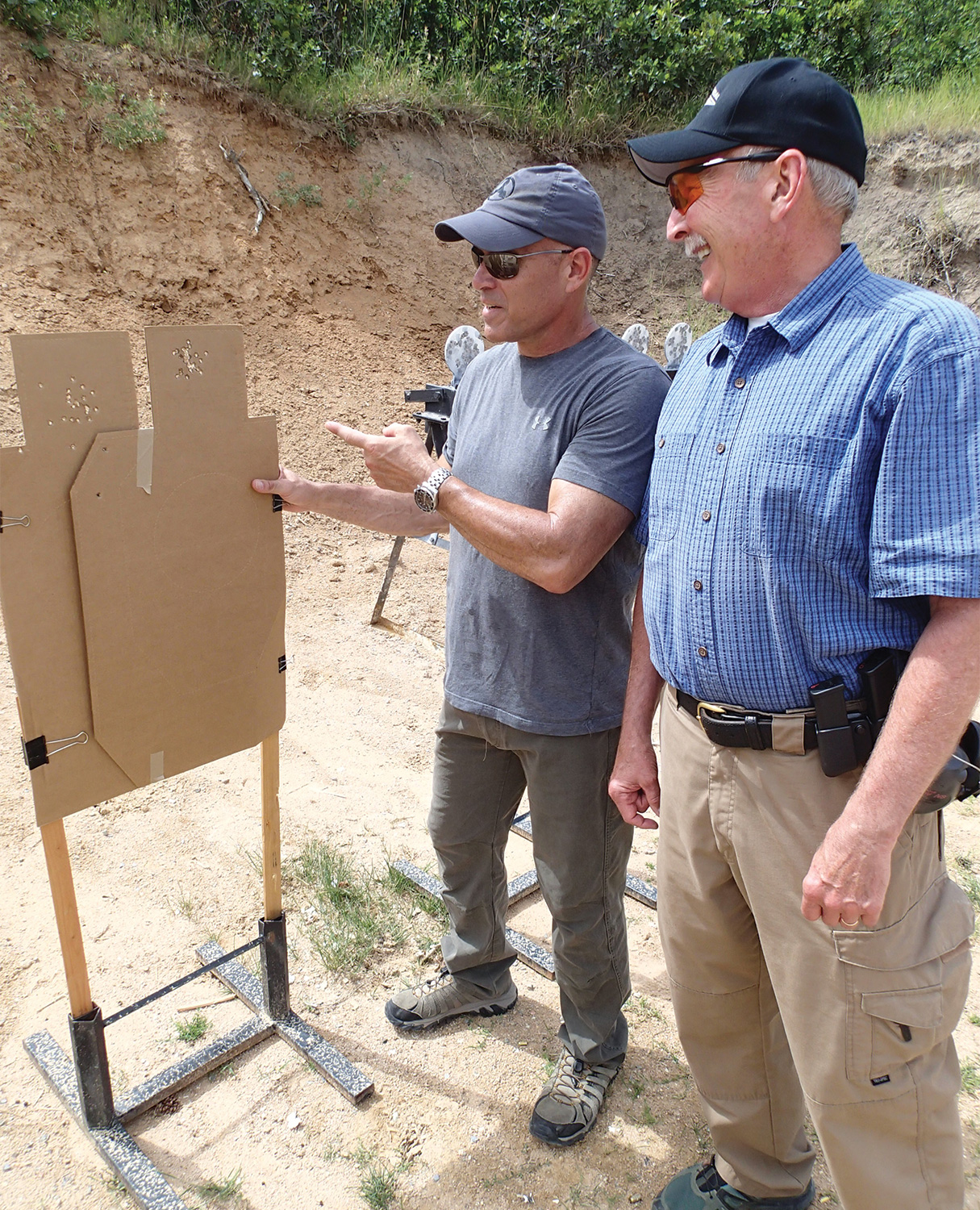 Clearly Suarez tools and techniques work: Gabe and a student examine a bunch of fight-enders. Photo by A1F Staff

First is that those notch and post sights help you transition from conventional-only to the dot-plus-conventional, and dot-only sighting. Most people struggle with finding the dot quickly early on, and co-witness “irons” will get you out of this phase sooner. Getting on the dot as part of a natural, appropriately rapid presentation involves a little unlearning, namely of back-sight-to-front-sight-to-target alignment. There’s some reassurance in seeing both line up that isn’t altogether conscious, but still helps the eyes and brain get used to seeing the dot and target on the same visual plane.

The muscular and skeletal aspects will follow suit. It doesn’t generally take that long for all the things you can do with conventional sights to migrate to dot sight skills, but the welcome byproduct of that dot being on the same visual plane (as the target) is speed.

Then there’s reliability. I tossed my gun and then made some distance shots in the class to shore up the ruggedness of our configurations. But you’d be nuts to think that nothing—even our stuff—never breaks, though we take some special steps to see that ours are really rugged. Conventional sights give you a backup in extreme circumstances, though we are pretty adamant that a high-quality red dot like we use is unlikely to fail even in very hard use.

I think we also convinced the students that there are shooting situations where the conventional sights enhance speed and accuracy, but that’s tough to relay off the range. There, we can demonstrate the advantages and then let students see for themselves how it improves their own manipulations.

A1F: You hit on what we thought was one of the best things in the class there—the idea of “appropriate speed.” This is the proactive vs. reactive shooting situation, correct?

GS: Yes. At Suarez, we put a lot of effort into not letting techniques or technology stand still. The dangers law enforcement, military and serious civilian shooters face have changed, and we’ve changed with it.

In terms of reactive vs. proactive, many people think mostly of the first when it comes to their own carry. It’s also straightforward: This is a bad-guy, sharpened-screwdriver-in-the-dark-parking lot type of assault. They still happen, of course, but you need different skills for that than you do for an increasingly likely sort of proactive fight such as an active shooter. In a “traditional assault,” red-dots vs. conventional sights probably won’t make a big impact. In fact, at three yards, you do not need to use any sighting system at all. When ranges are short, you’re already working to catch up—correct movement strategies will mean more than meticulous shot placement.

In proactive circumstances, the adversary—such as a terrorist or an active shooter—won’t be focused on you, at least not initially. Movement is less important, and accuracy more, so it’s also where the red dot is a massive advantage. Learn these skills and supplement them with equipment that’s up to the challenge, and you may be saving a lot of lives, and not just those you personally value.

… but you need different skills for that than you do for an increasingly likely sort of proactive fight such as an active shooter.There are gradients here too, which is why we have drills like the “Instanbul.” It gives students a way to see how fights can transition from proactive to reactive, and how that may require more than one way to think about and use your sight technologies. <<Laughing>> It’s also the most dramatic drill in the course—plenty of rounds and movement … nobody says “no” to one more rep. But the point of it is reinforcement of deadly serious priorities and hierarchies of action in life-and-death situations, and it teaches that lesson very well.

A1F: We took our first Suarez course years ago with another instructor, and it really brought the importance of “getting off the ‘X’" home. But even this is in transition at Suarez as we saw in the class.

GS: Very much so. Especially in our work with law enforcement, we’ve seen that lateral and diagonal movements, however explosive, just won’t get the job done in all situations. That may sound like a complication, but it really isn’t. “Getting off the ‘X’,” combined with appropriate gun skills, is still a crucial survival technique and mindset. But as you saw, our new recommendations about how to accomplish this achieve all the old goals—which were and are still valid—but now do more to compromise your attacker’s ability to deal with your movements in two ways: You’re a(n even) tougher target, and a more dangerous adversary.

A1F: Thanks so much for taking some time with us, Gabe. Always a pleasure, to say nothing of a titanic learning opportunity.

A last thought, Carry Lifers: If you haven’t taken a course to enhance your skills in the last two years, we politely suggest you’re overdue. For reasons we’ll get to down the road (at least by implication), firearms training has improved a good deal. We think we’re safe in saying that most Suarez International content is not for the beginner, but at least one belongs on the bucket list of every serious shooter.

Frank Winn has been studying arms and their relationship to tyranny, meaningful liberty and personal security all his adult life. He has been a firearms safety/shooting instructor for more than 20 years, and earned state, regional and national titles in several competitive disciplines.
In this article
Frank Winn, Carry Life, Gabe Suarez, Suarez International, Trijicon, RMR, Leupold, DeltaPoint, Istanbul Drill, Red Dot

Buy A Trijicon Thermal Optic, Get A Free Tenmile Riflescope | An Official Journal Of The NRA