Beware the average American. When their rights are red-taped away, when they are abused, made into victims and treated as if some of their freedoms were the cause of criminal violence, they will stand up, fists clenched, and demand respect. Even after losses in courts and legislatures, they won’t give up advocating for what is right.

This is the history of the NRA and it is how the U.S. Supreme Court case New York State Rifle & Pistol Association v. Bruen became a poignant example of U.S. citizens’ continuous hunger to be free.

Two plaintiffs, both members of the New York State Rifle & Pistol Association (NYSRPA), an NRA-affiliated group, came to Tom King, president of the NYSRPA and an NRA board member, with a complaint that a local judge had denied them their constitutional right to carry a concealed firearm for self-
defense outside their homes. They asked if there was something they could do about it. King called the NRA.

Thus began an American story that should be made into a movie about these civil-rights heroes and the civil-liberties associations behind them, as all of its real characters are “Mr. Smith Goes to Washington” (1939) types who stood up to the system and won.

Here is that story from Tom King, a man who helped bring good, freedom-loving Americans together to petition for their rights.

A1F: Congratulations! What does it feel like to play a part in winning a critical constitutional challenge—indeed an important civil-rights case?
King: I always believed we had a good chance of winning, as the issue is so constitutionally plain: How can a local licensing official be allowed to take away a right that’s specifically protected in the U.S. Bill of Rights simply because that official doesn’t happen to like this right? Certainly no other right is allowed to be treated this way. If Brandon Koch or Robert Nash happened to live in another county or had a different judge, they would have been given a permit to carry concealed. They are law-abiding citizens who can pass the background check.

So, yes, it feels good to know the process works as long as we do have justices on the bench who know they are bound by the U.S. Constitution.

A1F: How did this case get started?
King: Both plaintiffs, Brandon Koch and Robert Nash, were members of the NYSRPA who came to us of their own accord. A licensing official—a judge named Richard McNally—had denied them both carry permits. As this was then a “may-issue” state, the judge was able to use his anti-gun bias to deny them their constitutional rights based on a “proper-cause” requirement.

Basically, thanks to the NRA’s legal team, we began this court challenge by suing the state officials who oversee the processing of licensing applications. We argued—successfully, as it finally turned out—that licensing officials had violated these plaintiffs’ Second and Fourteenth Amendment rights.

But there were setbacks. A district court dismissed the complaint and a court of appeals affirmed that poor decision. Both courts relied on the Second Circuit’s prior decision in Kachalsky v. County of Westchester (2012), which held that the “proper-cause” requirement was “substantially related to the achievement of an important governmental interest.”

In NYSRPA v. Bruen, the U.S. Supreme Court has now struck down this “proper-cause” requirement. 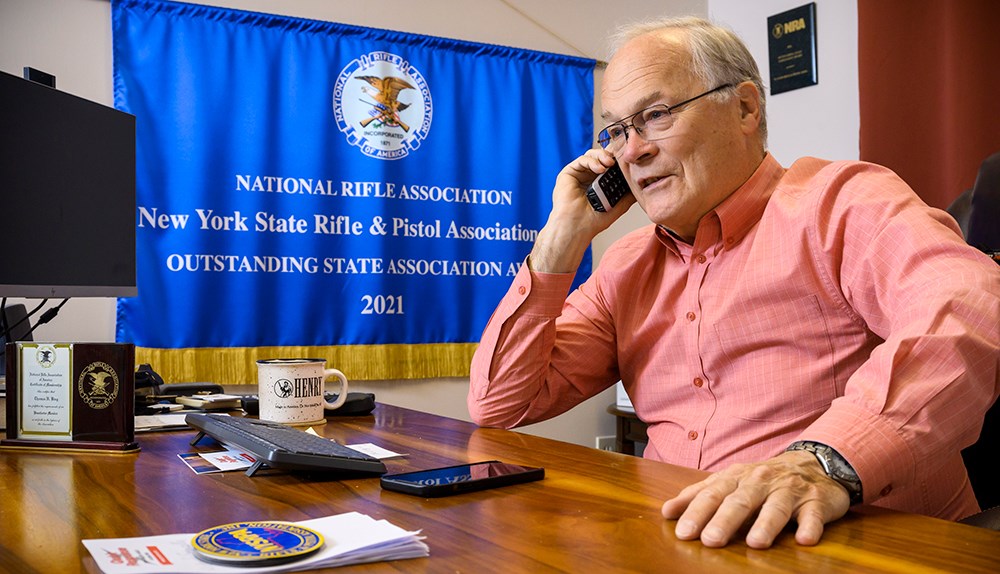 A1F: It sounds like this judge has a particular dislike for our Second Amendment freedoms.
King: That’s putting it mildly. One NYSRPA member told me—and realize this member is a retired police officer who happens to be black and who lives in a tough part of town—he went to Judge McNally to amend his pistol license. This retired police officer simply wanted to add another gun to the license, but this judge told him he had no right to own more than four guns. The law didn’t say that. This was just an arbitrary opinion from a licensing official who doesn’t like this part of the U.S. Bill of Rights.

A1F: How would you describe the tone of the media members who’ve contacted you for comment about the decision—angry, depressed and baffled, or curious, questioning and sincere? Do any of them have a solid understanding of this right?
King: Not many understand this constitutional right, but there are exceptions. We coordinated all media through NRA Public Affairs and, thanks to their experienced hands, it worked out very well. I just wish the media would not try to spin facts or to formulate opinions for their readers, but I think most people are aware now that many of them do just that. 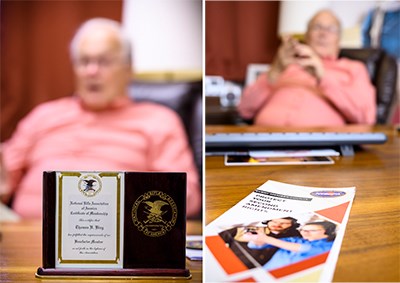 A1F: Soon after the U.S. Supreme Court ruled that the right to bear arms extends outside the home, New York Gov. Kathy Hochul (D) tweeted: “The Supreme Court’s appalling decision on concealed carry does not activate any immediate changes to State gun laws or allow permit owners to carry outside their homes.” What do you see in the immediate future as New York reacts to this ruling?
King: Our fight for freedom continues. The New York legislature held a special session and quickly passed a lot of bad law. Instead of the unconstitutional “proper-cause” requirement, state law now requires citizens who apply for a concealed-carry permit to show “good moral character.” That’s a very unclear hurdle, but to prove it, citizens will have to give the state their social-media handles so someone can check up on them. The law also includes requirements to pass a firearm-safety course and test.

They also massively expanded a list of “sensitive places” that prohibit the citizen’s right to carry. The Supreme Court ruling said, “Put simply, there is no historical basis for New York to effectively declare the island of Manhattan a ‘sensitive place’ simply because it is crowded and protected generally by the New York City Police Department.” But they necessarily left the details to be worked out in the states. Gov. Hochul and her anti-freedom allies in the state of New York quickly expanded restrictions to everywhere they thought they could get away with. I certainly foresee more court battles and future legislative sessions that’ll give us an opportunity to push back.

A1F: The 6-3 majority decision, written by Justice Clarence Thomas, says, “It is undisputed that petitioners Koch and Nash—two ordinary, law-abiding, adult citizens—are part of ‘the people’ whom the Second Amendment protects … . The Court has little difficulty concluding also that the plain text of the Second Amendment protects Koch’s and Nash’s proposed course of conduct—carrying handguns publicly for self-defense.” This is plain, as the Second Amendment is plain, but why, in your opinion, have so many judges before this ruling missed this obvious truth about the peoples’ will?
King: Politics, pure and simple. Some judges and justices have put their personal politics in front of the peoples’ will, as the peoples’ will is precisely what the U.S. Constitution is. If the people want to amend the Constitution, they can; there is a process for that; it is not easy, as amending a constitution shouldn’t be, but it can and has been done. Judges, however, aren’t elected or nominated to write law or to rewrite the U.S. Constitution. They are supposed to rule according to the law, which is what a majority of justices did in Bruen.

A1F: “The constitutional right to bear arms in public for self-defense is not ‘a second-class right, subject to an entirely different body of rules than the other Bill of Rights guarantees,’” wrote Justice Thomas in Bruen. “The exercise of other constitutional rights does not require individuals to demonstrate to government officers some special need.” Do you expect the judge who denied Robert Nash his rights to apologize?
King: No, but he should. Judge McNally was elected to a 14-year term in 2013 that expires in 2027. He is a former district attorney who, I believe, is eyeing a political career. 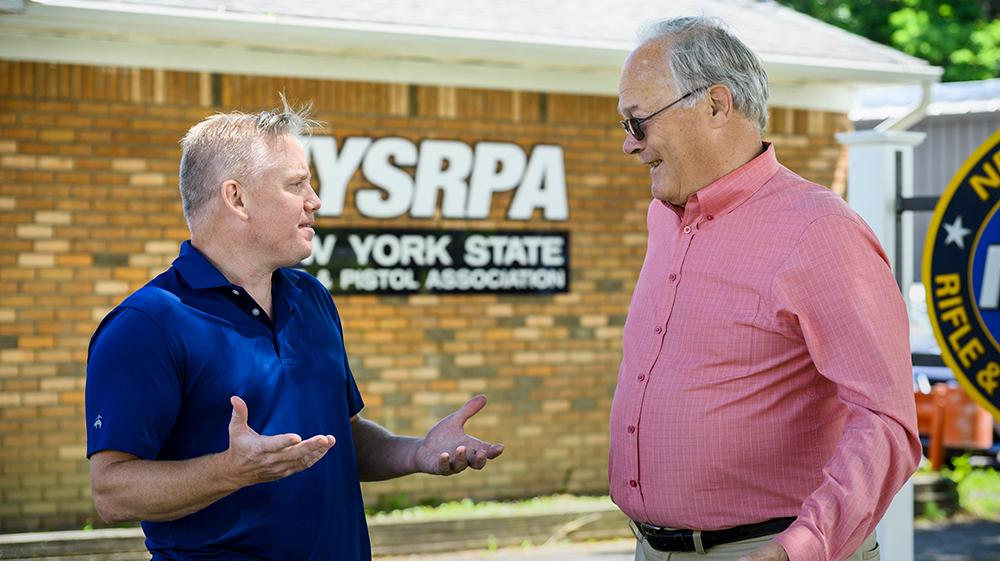 Tom King (right), president of the NYSRPA, and Frank Miniter, editor in chief of America’s 1st Freedom, are shown here discussing the ramifications of NYSRPA v. Bruen for New York and beyond.

A1F: After this U.S. Supreme Court ruling, President Joe Biden (D) published a letter saying, “I am deeply disappointed by the Supreme Court’s ruling in New York State Rifle & Pistol Association v. Bruen. Since 1911, the State of New York has required individuals who would like to carry a concealed weapon in public to show a need to do so for the purpose of self-defense and to acquire a license. More than a century later, the United States Supreme Court has chosen to strike down New York’s long-established authority to protect its citizens. This ruling contradicts both common sense and the Constitution, and should deeply trouble us all.” What is your reaction to this statement?
King: I am tempted to say that I am deeply disappointed in this president, but then it has long been clear that Joe Biden doesn’t respect the individual’s right to keep and bear arms. He might prefer it was an elite right for the few; he might like it if licensing officials could simply decide who can carry concealed—such as, perhaps, his son, Hunter—but that is not what an individual right is. Nevertheless, this is a common-sense ruling from the high court. Biden is the one who is troubling us all, not this Court.

A1F: As we are talking, New York Gov. Kathy Hochul has won her party’s nomination for governor and Lee Zeldin has won the Republican nomination. Is Zeldin really pro-freedom? And, in the election this fall, does Zeldin have a chance?
King: I’ve known Lee Zeldin for something like 25 years. Yes, he is pro-freedom. As for his chances, if NYSRPA and NRA members—and anyone else who loves their freedom—turn out in this election, I think Zeldin can beat Hochul. And we might flip a lot of seats in the State Assembly and Senate.

So yes, I am hopeful. People are waking up. They know their freedom is on the ballot. We have a lot of new gun owners. We have too much crime and too many bad policies increasing the crime rates in this state. There are challenges with the media, but more people than ever get it. So yes, even here in New York, freedom can win. In his bid to be president in 2000, Al Gore lost his own state in part because of his position on Second Amendment freedoms; Hochul could do the same here.

The Races That Will Decide Our Freedom

Shooting Straight with Lt. Gov. Mark Robinson | An Official Journal Of The NRA

Shooting Straight with Lt. Gov. Mark Robinson | An Official Journal Of The NRA

END_OF_DOCUMENT_TOKEN_TO_BE_REPLACED

Battleground Races for the Second Amendment

Key races for senators, governors and many other elected positions around the coutnry require gun owners' attention and votes.

It’s not unusual for anti-Second Amendment politicians to lambaste and lie about this nation’s oldest-civil rights organization and gun owners.

Shotguns are an iconic American defensive tool and it's no wonder that millions of Americans prefer them for home defense. There is hardly a better tool for self-defense, and the Mossberg 940 stands out amongst them.

For over a decade, lawmakers in Washington state have blamed firearms and the Second Amendment for increases in violent crime.

Learning to utilize a pistol when positioning isn't perfect takes practice. This drill will help you become more adept at making accurate shots from various positions.