Ruger is considered America’s most-prolific arms maker. They churn out solid, timely guns, manufactured efficiently and in such quantity that they’re usually less expensive than the competitions’. Ruger typically isn’t the first in any new category, but offers “blue-collar” value. The MAX-9 handgun holds true to these roots.

The MAX-9 is the company’s answer for the smoking-hot category that I call the “double-stack micro compact,” part of the never-ending quest for the ultimate carry gun. SIG Sauer led with its 10+1 round P365, and Springfield’s Hellcat and Smith and Wesson’s Shield Plus soon followed. Others are in the works. These handguns typically weigh around 20 ounces and are 1-inch thick, yet hold 11 to 14 rounds of 9 mm. They’re just large enough to provide the grip space needed for accurate shooting, deft manipulation and adequate recoil control.

The MAX-9 has all the features of these guns and then some, yet costs about $100 less. Weighing 18.4 ounces with its 10-round magazine installed (18.9 ounces with its 12-rounder), the MAX-9 is a striker fired, polymer-framed, recoil-operated 9 mm pistol. It’s 6 inches long, 4.52 inches tall and its slide is 0.95 inches. I measured 1.04 inches wide overall. The width measurement is critical, because thinner guns are much easier to conceal when worn against the body. The width measurement was trimmed by drastically reducing the thickness of the grip walls to allow a double-stack magazine, while reducing the grip’s overall circumference. (Engineers used to think such a thin polymer would invite structural problems; however, the magazine also provides skeletal rigidity.) 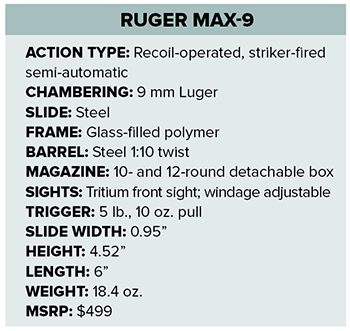 The MAX-9 was designed to offer every feature modern concealed carriers want. Its grip is finely stippled to maximize purchase; its slide is serrated to facilitate racking and “de-horned” to minimize snagging during the draw and holster; it’s available with or without a manual thumb safety; it comes standard with wonderful steel sights that feature a caged-front Tritium “Night Sight” ampule; and it has a switchable magazine-release button for lefties and a handy peep hole atop the barrel for chamber checks. The MAX-9 comes optics-ready via a machined cutout and J-Point-style mounting holes in the slide. While some shooters can argue against a battery-powered optic for concealed carry, few can deny its popularity. Ruger was wise to include it.

Mechanically, the MAX-9, like all Ruger guns, is solid. Its machined carbon-steel slide is robust down to its oxide-coated matte finish; its barrel is flared toward the end in an integral barrel bushing that ensures the barrel is centered exactly in the slide after each shot. The gun features a dual recoil spring to cycle the action, which goes a long way in slowing down its impulse. The fire-control assembly is housed in an aluminum chassis. The metal trigger follows the Glock pattern, featuring an articulated inner blade to ensure its trigger must be purposely pulled by a finger. The trigger’s first stage spans approximately 0.3 inches before entering the second stage, where it breaks at 5 pounds, 10 ounces. The trigger feel is wholly Ruger: perfectly adequate for a defensive use, striker-fired handgun—though just as with its competitors, I wish it were shorter, lighter and less mushy.

The MAX-9’s beavertail grip extends high on the gun, so muzzle flip is significantly mitigated and the gun can be fired intuitively while under pressure. Lightweight guns naturally have heavier recoil, so the higher the web of the hand can grip the gun, the more it can apply the leverage needed to counteract the recoil. I found the MAX-9 better than SIG’s excellent P365 in this regard, and it seemed to recoil less than it theoretically should. Shooters of average or small hands will find the MAX-9’s grip to be a good size, allowing room for all four fingers. This fact promotes accurate shooting and positive manipulation of all its controls. I quickly grew accustomed to its rather sluggish trigger and learned to like it better the more I shot it.

After 400 rounds, the MAX-9 exhibited good reliability. I experienced exactly one jam. In terms of accuracy, this little gun was great, thanks at least in part to its excellent sights and quality barrel. I averaged 1.4-inch groups at 10 yards with the irons and 1-inch groups with an optic installed. I hit targets out to 50 yards. Of course, handgun accuracy testing is as much a testing of the shooter as the gun, but it proved to me that the MAX-9 has no inherent accuracy issues. If you do your part, it will deliver. This gun is easy to carry concealed all day thanks to its diminutive size, yet it handles and shoots like a slightly larger gun.

As much as I like the feel, features and price of Ruger’s first crack at its own ultimate carry gun, I didn’t find it flawless. I experienced an issue with the gun’s slide-release mechanism. Although the instruction manual indicates the slide will release from its locked position with manual rearward pressure, my test gun failed to do so. After each magazine change when the slide remained open, I had to depress the slide-release button manually. This was a chore because this button was so firm that I often had to use both thumbs. An apologetic Ruger employee told me he had not heard of this issue, and that they’ve sold “no small number of these guns.” Soon, there was a new gun on its way to me—Ruger’s customer service is excellent. After receiving the new unit, I was pleased to see that it worked exactly as intended. In talking to other professional writers, I found none who experienced the same problem, indicating my initial test unit was likely an anomaly.

Why Ruger, a company known for its engineering, chose to require a tool for disassembly was also puzzling. The frame-mounted polymer shutter preventing the pin from being inadvertently removed or lost is cheap and can be difficult to actuate. Had Ruger designed a hand-removable pin, the shutter and tool wouldn’t be necessary. “The system is simple and very low-profile,” said Mark Gurney, Ruger’s director of product management, “and it has a very good history.” Ruger was trying to build the thinnest gun it could at the best price possible.

All told, the MAX-9 is a 13-round, optics-ready, easily concealable, 18-ounce handgun that won’t leave you wanting more accuracy or more rounds. It holds its own just considering its own merits, but when you factor in its lower cost, you can see why Ruger will remain the country’s top seller of guns well into the foreseeable future.

Does Birdshot Overpenetrate? | An Official Journal Of The NRA

Kahr P9: Designed For Personal Protection | An Official Journal Of The NRA

END_OF_DOCUMENT_TOKEN_TO_BE_REPLACED

Biden seems determined to try to ban not just so-called “assault weapons,” but also now seems to be going after all semi-automatic firearms, by implying anyone who owns them must be, in his mind, “sick.”

For the truth on America's rifle, America's 1st Freedom spoke to the man who wrote the book on it.