The first Daisy Red Ryder carbine ever made was given to Fred Harman, the illustrator who created the famous cowboy character after whom the airguns were named, 80 years ago on this day. It’s now displayed in the Daisy Airgun Museum and has inspired a limited-edition version for Daisy collectors to enjoy.

The original gun is unique, likely a preproduction or prototype model of the “first variation” No. 111, Model 40 rifles, with copper forearm and muzzle bands. It has the words “LIMITED EDITION/ONE ONLY/Certified:/Cass Hough/Robert O. Wesley” written on the stock, along with a shadowed star shape, in which a gold star was likely situated.

One of the gun’s signers, Cass Hough, was Daisy’s vice president at the time and the grandson of L.C. Hough, a man who reportedly said the famous words, “It’s a Daisy,” about the airguns and thereby inspired the company’s name. The other signer, Robert O. Wesley, was the company’s advertising manager.

After receiving the gun, Harman put clear tape over the signatures in an attempt to preserve them. He scratched the date into the frame: “APR 2/40,” then hung the carbine on the wall of his studio. 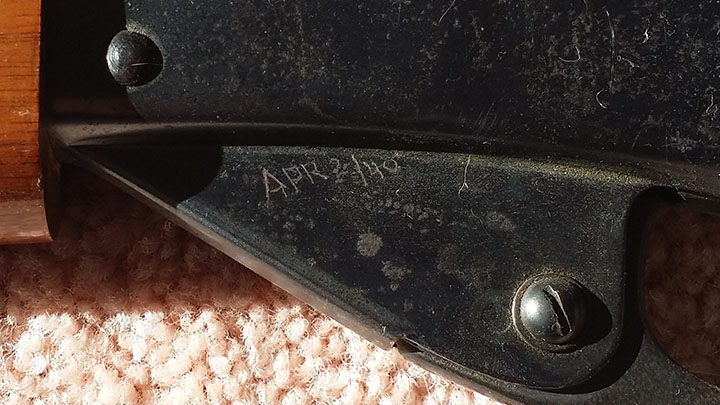 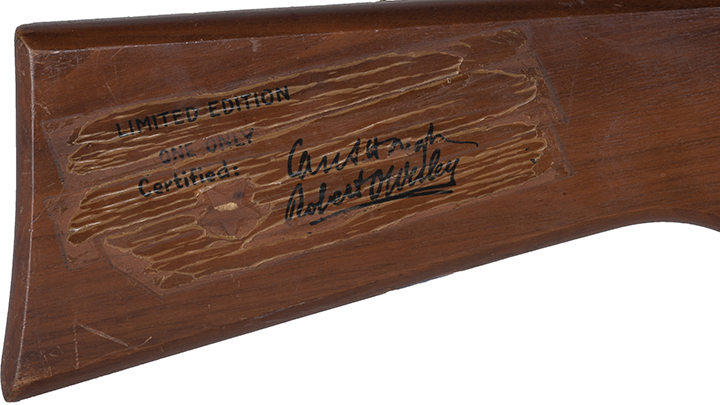 It was still on the wall in 2009 when Joe Murfin, Daisy Airgun Museum chairman, was invited to see the annual Red Ryder Roundup in Pagosa Springs, Colo. While in town for that event, he met Fred Harman III, son of the comic artist, and his wife. “She served me milk and cookies while he showed me around his father's studio,” Murfin told America’s 1st Freedom. “Fred pointed out an old Daisy No. 111, Model 40 Red Ryder, mounted high on the wall. He told me that it was the first Daisy Red Ryder ever made, given to his father by two Daisy executives. Only the left side of the stock was visible, though—the side with the Red Ryder logo. While I recognized that it was an early variation of that model, I had no reason to believe it was anything more than that.”

Murfin didn’t think much more about that event until after Fred Harman III died, seven years later. He then received a call from one of the Red Ryder Roudup organizers suggesting he should look into putting the gun in the Daisy Airgun Museum. Having only seen the one side of it, Murfin wasn’t sure if it should be included in the museum, but when the intermediary sent more complete pictures, he realized its unique nature. Norma Harman, Fred Harman III’s widow, wanted the gun to be somewhere it could be appreciated. She agreed that the Daisy Airgun Museum was the ideal place and donated it to them. Murfin took steps to verify the gun’s provenance, including having an expert collector inspect it.

Assured of its authenticity, Murfin arranged for it to be displayed at the museum. The Daisy Airgun Museum has now commissioned Daisy to make 1,000 “First Daisy Red Ryder Tribute” guns and is donating a portion of the proceeds to the Fred Harman Art Museum.

“Great things sometimes take a long time to come to pass,” Murfin said. “It was 2009 when I first went to Pagosa Springs, met Fred Harman III and saw this Daisy Red Ryder BB gun hanging high up on the wall in his father's studio. And it was 2019, ten years later, when the Daisy Airgun Museum received the donation of this historically significant gun. It was important to Mrs. Harman that this gun be preserved in a very public way, so that thousands of people could see it every year and know who Fred Harman was. I’m glad we can honor his memory this way.”

Gabby Franco Censored on LinkedIn—Again. | An Official Journal Of The NRA

Gabby Franco Censored on LinkedIn—Again. | An Official Journal Of The NRA