Different folks prefer different styles of handguns—that much is clear. But most folks who depend on a handgun for their job (and who are free to choose what gun they carry) either choose a high-capacity, striker-fired, polymer-framed gun, or they choose a high-capacity, metal-framed DA/SA gun. The main advantages of polymer, striker-fired handguns are that they’re lightweight for easy carrying and ultra-reliable, whereas the main advantages of metal-framed guns are that they feel sturdier in the hand and the extra weight minimizes recoil.

In late 2020, SIG Sauer combined features from its striker-fired P320 with its venerable P226-style metal-framed handgun to produce a hybrid named the Custom Works P320 AXG Scorpion. This high-capacity (17+1), striker-fired pistol is the first made in the company’s new Custom Works division, where it is being offered in a limited run of unknown quantity. I suspect that number will depend on sales, and I expect this gun to sell briskly. Why? Because it’s an ultra-reliable SIG pistol whose wonderful balance of size (3.9-inch barrel, 7.4 inches overall, 31.3 ounces) and “shootability” (light recoil, high-capacity, optic-ready, ultra-accurate) make it ideal for everything from competition to duty to concealed carry. Plus, it’s strikingly handsome, and that never hurts.

The frame, as legally defined for this gun, is the stainless-steel housing of the fire-control unit. But perhaps the hallmark feature of the Scorpion is its aluminum Alloy XSeries Grip (AXG). Think of the grip module like the lower receiver of an AR: It provides a gripping surface for the hands and a home for the magazine, trigger assembly and light rail, on which the slide and striker system ride. The advantages of making this grip from aluminum is that its front strap can be aggressively checkered for outstanding purchase—unlike polymer, sweat has little effect. The backstrap has an integrally machined slot into which a metal module can be inserted for customizable fit. It also allows the use of interchangeable grip panels, much like a 1911’s. SIG chose Hogue G10 (a Micarta-like material) “Piranha” scales for their great functionality and badass looks. Overall, the metal frame adds weight to the gun that makes it more pleasant to shoot; it seems to give the shooter instant feedback, much like a sports car with a stiff suspension versus a soft-riding sedan. And there is just something about the feel of an all-metal handgun that many shooters love. Plus, because the frame is made of metal, it can be finished in Cerakote to match the slide—SIG chose its coppery Flat Dark Earth. All told, with its metal frame and acute grip angle that for many people promotes more-intuitive sight alignment than, say, a Glock, the Scorpion feels more like a 1911 than a P320 of old. So, if any 1911 fans out there are wanting to transition to a smaller, higher-capacity handgun, this SIG may be the one.

The Scorpion’s slide features an integral cutout for a red-dot optic, which has become extremely popular. Admirably, the cutout is tapped in two positions that will not only accommodate SIG’s Romeo red-dot sight, but also third-party optics such as Trijicon’s RMR. The slide is fitted with SIG’s tritium-filled three-dot XRAY3 day/night sights; the rear is a windage-adjustable U-notch; the front is a post. Unless you desire taller sights for co-witnessing through an optic, you won’t need aftermarket sights, as the XRAYs are top-notch. Front and rear slide serrations enhance speed-racking and chamber-checking. Fully ambidextrous (or swappable) controls and a flashlight rail finish out the frame. 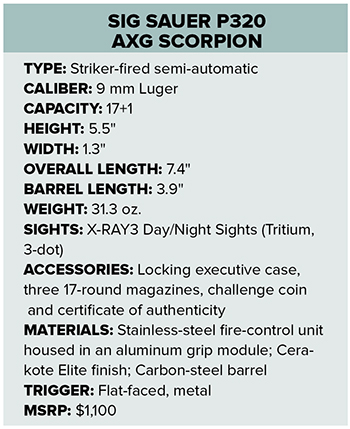 The metal, skeletonized flat trigger, borrowed from SIG’s top-end “Legion” series, is a notable improvement over a stock P320 trigger. Indeed, it’s an improvement over nearly all striker-fired guns, which necessarily have inferior triggers compared to high-quality single-actions. My test sample Scorpion trigger averaged 4 pounds, 12 ounces, with a quarter-inch of slack before an eighth-inch valley of creep during the actual pull. It’s not immaculate, but it’s better than most. I wish it were a pound lighter, had no creep and its reset spring were a little stiffer, but then again, I also wish I were six inches taller with a mustache and my name was Magnum.

In the performance category, the Scorpion is an all-star. After 500 rounds, the gun remained 100% reliable. Expect 99.9% reliability over its lifetime if kept clean and oiled.

The Scorpion also proved to be one of the most-accurate striker-fired guns I’ve ever shot. I recorded 0.9-inch groups at 10 yards from a rest with iron sights and 0.75-inch groups with an optic installed.

Recoil mitigation is great, owing largely to its near-40-ounce (fully loaded) weight, but also to the grip’s purchase. Double taps were easy, as were speed reloads, compliments of the gun’s flared magazine well; however, one of the prices paid for this gun’s perpendicular grip angle is that it places the bore axis higher above the hand and therefore creates more leverage during recoil. For comparison, recoil is slightly less than a Glock 19, but I expected it to be much less because this SIG weighs 6 ounces more.

Accuracy results are averages of 5, 3-shot groups at 10 yards off a sandbag rest with open sights. Velocities are as published by the manufacturers.

I love that this gun comes with everything serious pistol shooters need right out of its custom-fitted box, including three 17-round magazines. It even comes with a SIG challenge coin and a certificate of authenticity, if you’re into that stuff. Rest assured, while the gun is easily customizable thanks to its modular build, it doesn’t need any upgrades.

In conclusion, SIG’s new Custom Works P320 AXG Scorpion is a joy to handle, shoot and show off. It does everything well, has few flaws and, most importantly, feels great in my hand. If I could only choose one gun for everything—target shooting, home defense and concealed carry—this Scorpion, with its 18 total rounds of easy-to-shoot, concealable firepower and its strikingly good looks, would likely be the one I’d choose, regardless of its price tag of around $1,100. (Go to A1F.com for a video review of the AXG Scorpion.)

Aiming A Shotgun? Is That Really Needed? | An Official Journal Of The NRA

END_OF_DOCUMENT_TOKEN_TO_BE_REPLACED

For dry practice to be truly effective, you need to practice more than just easy, controlled shots. Here's how to practice up to a defensive level.

If excellence in the AR-15 platform is what you are looking for, try Warrior Systems Manufacturing's WSM15. This is a solid and accurate rifle with great aesthetics and a reasonable price tag.

The ATF Should't be Political

The ATF is celebrating its golden anniversary it its modern form this year. Unfortunately, the Biden administration seems to be focused on turning this enforcement agency into an anti-Second Amendment wrecking ball.

Now is a time for nationwide, American flag waving bash with fireworks painting our skies red, white and blue.

The National Rifle Association welcomes the Supreme Court’s decision in NYSRPA v. Bruen. The Court affirmed that the right to bear arms does not stop at a person’s front door. This is the most significant Second Amendment ruling in more than a decade.

NRA Gun Of The Week: Magnum Research Big Frame Revolver In 350 Legend | An Official Journal Of The NRA