In early 2020, Glock finally introduced a handgun chambered in the world’s most-popular cartridge: the .22 LR, giving us the Glock 44.

If, at first glance, you confuse this .22-caliber striker-fired pistol with the company’s Gen. 5 Model 19 (9 mm), then Glock accomplished its goal. The Model 44’s polymer frame is virtually identical, including all the controls, grip stippling and even the interchangeable backstraps for a custom fit. The real difference, notwithstanding the obvious bore difference, is the Model 44’s slide, which is made of polymer composite and reinforced in critical friction areas by steel. This was from necessity—if Glock wanted a full-length slide that mimicked the look and feel of its centerfires, then it had to produce a slide much lighter than its steel versions so it would function under the mild-recoil power of .22 LR rounds. (Like all Glocks, the Model 44 is recoil-operated.) As a result of its polymer slide, this gun weighs 14.6 ounces, whereas the Glock 19 weighs 23.6 ounces. Other than that, the 44 is a rimfire facsimile of its centerfire brethren. It features the same controls, sights (front post, rear adjustable), “Safe Action” trigger and a footprint so exact that the holsters are interchangeable. Now Glock fans—of which there are legions—can practice just as they would with their 19s and Model 23s, but at a fraction of the cost.

Testing proved that the 44 is a Glock alright, not a cheap replica akin to a plastic airsoft version of one. Though its trigger pull measured 7 pounds—compared to the 5.5 pounds of my Glock 19—everything else is spot-on. I fired 500 rounds through it from sandbags and concealment. In so doing, no doubt I became a better shooter as well as saving approximately $108 dollars compared to what it would cost to fire 500 rounds of 9 mm.

I especially liked the handgun’s magazines, which feature finger-friendly tabs so the shooter can easily pull the spring down to facilitate loading. The side of each mag features a viewing slot and meter to quickly discern how many rounds are left. Like all polymer Glock magazines, the 44’s are high-quality.

Predictably, accuracy was not as good as some other bull-barreled target guns I’ve tested, but match shooting is not this pistol’s intention. Its 4-inch “Glock Marksman Barrel” was still very accurate.

Concerning reliability, I’ve seen several negative reviews on the Glock 44 failing to feed. While I am normally quick to call out flaws if a product deserves it, I’d argue that these reviewers seem to be holding this .22 semi-auto handgun to Glock’s centerfire standards. Fact is, rimfire .22 LRs, due to their less-reliable priming system, non-rebated rims and minimal recoil energy, are simply less reliable than centerfires. It’s a big reason why experts wouldn’t recommend a .22 for self-defense. 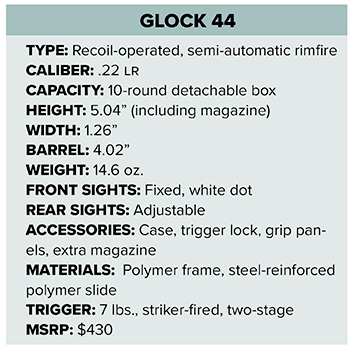 In testing, I also experienced more jams than usual while using standard-velocity 36-grain ammo; however, when I used high-velocity ammo such as CCI Stinger, heavier 40-grain ammo or premium copper-plated ammo—the kind recommended for semi-auto .22 pistols—malfunctions were minimal. This evidence suggests that the Glock 44 requires a minimum cartridge-generated energy threshold of more than roughly 70 foot-pounds of energy, a number that the 36-grain standard velocity loads fall below. Just buy high velocity or 40-grain ammo, keep the gun clean and you’ll be fine.

As for negatives, there are two: First, although the Glock 44’s rear sight is adjustable for elevation, my test unit printed 3 inches higher than point-of-aim at 15 yards with the rear sight set as low as it could go. I learned to hit the bullseye by compensating with a six o’clock hold, but it’s worth mentioning. Second, I wish Glock would have threaded the 44’s barrel. If you think .22 pistols are fun, try a suppressed .22 pistol! While I’m not sure if the gun would cycle reliably with a suppressor attached, Glock didn’t give me the option.

All in all, the Glock 44 serves its purpose as a Model 19 clone for inexpensive training, and so I’ll be adding one to my collection. It’s also extremely fun to shoot.

Kahr P9: Designed For Personal Protection | An Official Journal Of The NRA

Review: Stacatto 2011 P Pistols | An Official Journal Of The NRA

New for 2023: CCI Clean-22 Hyper Velocity | An Official Journal Of The NRA