Kevin Sorbo is an unusual sort of actor—right, he’s actually pro-Second Amendment. You can find him at KevinSorbo.net.

So Hercules contacted me. He wanted to talk about guns and freedom. Go figure. Hollywood must love this guy!

When he popped onto my screen for a video interview (you can watch it at A1F.com and on NRA Publications’ YouTube channel), Kevin Sorbo looked exactly like the actor I remembered from “Hercules: The Legendary Journeys” and so many other films, TV shows and commercials. The same jutting jaw, disarming smile and long, straight hair framing a big, beaming face. Behind him was his sword from Hercules.

His pro-freedom views make him that much more captivating . Sorbo is one of those rare actors who is precisely what he seems, despite the fakery of Hollywood. He is unapologetically for the Second Amendment—and, by the way, for the First. He speaks his mind. 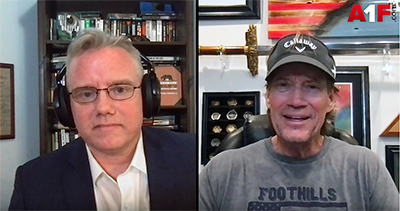 When Kevin Sorbo began speaking about his understanding of American freedom, even his agent dropped him.

He has been cancelled by Hollywood, Facebook and more. Even his long-time agent parted with him because of his American values. But, he has picked himself up and continued on with independent films and with writing, directing and more. Speaking to him left me with no doubt that his optimism, even more than his considerable talent, will keep him flying high. He can’t be stopped. He is a lesson for all of us in how tech censorship from the woke mob and the companies that agree with them, or cower before them, can be overcome.

A1F: You often tweet about our right to keep and bear arms. You’ve recently tweeted: “Instead of banning guns, let’s go to the source of the problem #bancrime2020”; “Guys why have we not banned rocks yet? Didn’t Cain use one to kill Abel?”; And, “Someone explain to me how lawmakers interpreted ‘Shall not be infringed,” into “Regulate the hell out of it.’”
Did you learn firsthand about this freedom when you grew up in Minnesota?
Sorbo: Growing up in Minnesota, I had many friends who were hunters, so I was aware of guns from a very young age in terms of hunting and target shooting. The only hunting I did as a kid was on my grandpa’s farm in Iowa, and I have many fond memories of pheasant and duck hunting. So, for me, the Second Amendment had a much more simple meaning. It wasn’t until I got older and more political that I saw how brilliant our Founders were and the reason the Second Amendment was so important then and is, perhaps, even more important today. The Founders wanted to protect the American citizens from the likes of government control we see growing today.

A1F: What do you like to shoot now?
Sorbo: I am more of a target guy. I have friends with ranches here in Florida and I take my two teenage boys, who are far better shots than I am, shooting all the time. It is so much fun to watch them learn and understand gun safety as they learn firsthand the reason we as civilians need guns for sport and for protection.

A1F: You’ve said, “Being a Christian and a conservative in Hollywood is kind of like being a double leper … thank God for independent movies, because without them I wouldn’t have a career right now.” When did Hollywood’s cancel culture begin to target you? Is this recent, as in post-President Trump, or did you run into these attacks back when you were starring as Hercules?
Sorbo: Cancel culture started back in 2012 for me. It was during a time when I was becoming more vocal. I saw the insanity of the “politically correct” crowd and saw that there was nothing correct about it. My manager and agent bid me a fond farewell, both saying they couldn’t represent me any longer. For an industry that screams and cries for tolerance and freedom of speech, it’s a one-way street with them. The hypocrisy is so blatant and obvious that all I can do is laugh about it. 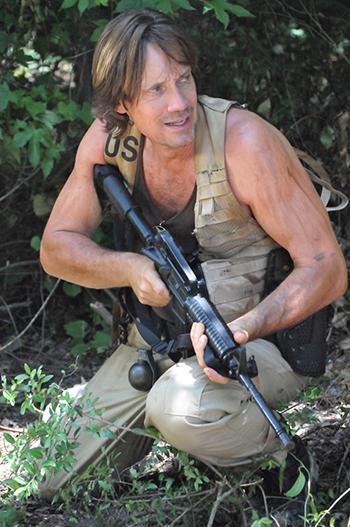 A1F: Do you see hope that pressure from independent films and new, smaller studios could, one day, force Hollywood to again accept others’ political views?
Sorbo: I don’t see that silver lining yet. All I see is a wider gap of hostility and anger and divisiveness. Which is too bad. I don’t harbor the hate the Left has for the non-woke. They say they want peace, but do they really? Independent films are just going to keep getting more and more popular because much of the public wants movies with a positive message. The woke narratives are simply unpalatable to most. The studios will just keep making the same action, visual-filled movies until people tire of them. Which I see happening now.

A1F: Have you ever, away from the cameras perhaps, had conversations with Hollywood studio executives, actors or others about the hypocrisy of using guns in film even as they publicly call for the Second Amendment to be taken away from normal Americans? If so, how do they defend their position?
Sorbo: They don’t defend their position. There is a fear of losing their jobs, so they just toe the line. I find it hard to believe behind closed doors they admit their hypocrisy. They do movies with actors shooting up and killing one stunt guy after another, and then take to social media to call for gun bans. Give me a break. They have armed security details and live in gated communities. They are in the safe bubbles as they clamor for people across America to be made less safe. They can’t look past their hair stylists, dog walkers and handlers to see it, but their preferred policies are and would harm normal, law-abiding Americans.

A1F: Many of the Left’s social-media companies have banned, demonetized and censored Americans for simply expressing their Second Amendment freedoms. You’ve also said Facebook has been “shadow-banning” you and you have recommended alternative sites, such as Parler.com and CloutHub.com, for those who wish to speak about things outside of the Left’s politically correct orthodoxy. In your view, will the marketplace eventually solve cancel culture?
Sorbo: I would love to do a profile of the typical troll out there having this ridiculous power over our lives. They behave as if they lead these amazing, perfect lives and have never done anything in their lives that they regret. It’s insane that we let these punks do what they do, and they need to be exposed. I do believe we are getting closer to that day, to make that happen, because people on both sides are getting sick of it. Facebook took me down for telling the truth and for offering up the other side of stories they stuff down our throats. I want to meet with Zuckerberg and ask him why he isn’t being taken down. Facebook was started as a womanizing program to rate the women at his college. Where are the feminists when you need them?

Editor’s note: Mark Zuckerberg, the founder of Facebook, told Congress that Facemash, the highly controversial site he created two years prior to Facebook, which rated the appearance of women at Harvard using their hacked school identification photos, was a “prank site” unrelated to the eventual rollout of Facebook.

A1F: What are you working on now?
Sorbo: I have a number of projects out right now. Check out my documentaries, “Before the Wrath,” “Against the Tide” and “Climate Hustle 2.” I had a movie just open called, “The Girl Who Believes in Miracles.” I have two other movies coming out, “One Nation Under God” and “Miracles in East Texas,” which I also directed. I also have four movies lined up to film and a new TV show—we shot eight episodes already—titled “The Potwins.” It is a sitcom much like Tim Allen’s “Last Man Standing.” Also, my books True Strength and True Faith are available.

A1F: How can people find and connect with you?
Sorbo: KevinSorbo.net and SorboFamilyFilmStudios.com are great places to go and leave your email info, and we will be in touch with updates. CloutHub, Parler and FreeSpace are great places to go for social media. They won’t be taking you down for telling the truth!

END_OF_DOCUMENT_TOKEN_TO_BE_REPLACED

Biden seems determined to try to ban not just so-called “assault weapons,” but also now seems to be going after all semi-automatic firearms, by implying anyone who owns them must be, in his mind, “sick.”

For the truth on America's rifle, America's 1st Freedom spoke to the man who wrote the book on it.