Stephen Hunter is a Pulitzer Prize-winning author whose book Point of Impact made it to the big screen in 2007 as Shooter, starring Mark Wahlberg. His experience in both mainstream newsrooms and Hollywood has given him an interesting perspective on the Second Amendment and the politics surrounding it.

His most recent book, Basil's War, is also one for every gun owner to have. Here, he sits down with Frank Miniter, America's 1st Freedom Editor in Chief, to talk about this book and more.​ 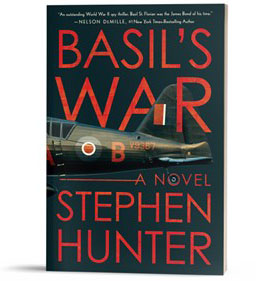 Basil’s War isn’t much like Stephen Hunter’s Bob Lee Swagger thrillers—books that so many gun owners know and love. Sure, like Swagger, Basil St. Florian, the main character in Basil’s War, has a tough-guy role. He is a British secret agent with a dangerous undercover mission to complete during World War II. But the voice is very different. The prose reads smoothly and powerfully as with all of Hunter’s novels. But Basil’s War is more whimsical than the Swagger novels. The voice here is more, if I can name a classic novel, like Evelyn Waugh’s Brideshead Revisited. Or, to compare it to another great, its tone reminded me of Joseph Heller’s Catch-22.

From page one, you find yourself cheering for Basil and, in a Monty Python sort of way, laughing at things you didn’t think you could laugh at. You are always worried about Basil, but not too much, as he has this unconquerable optimism that lets you know he’ll find a way.

All through it, you’ll see that Hunter knows his guns and knows his history of the second World War and how people lived and what they ate and the dilemma they were in. All that is carefully crafted background to an astonishingly merry diversion from this political age.

'Limited Standard': The M1919A6 Machine Gun | An Official Journal Of The NRA