Once you’ve learned the basics—safety, grip/stance, sight picture and trigger press—there is absolutely nothing wrong with taking a pause. Cementing these skills, what many would call the development of muscle memory, is a good thing. The value of time and repetition spent in rendering these as both conscious choices and unconscious reflexes is the mark of the serious shooter, particularly where safe handling is concerned.

What comes next, however, can be a puzzle. Often it depends on what you’re after. If your goal is safe, discreet, truly prepared carry, then holster choice and related drills are the natural sequitur. Ditto, if you decide you want to compete, though gear choice is likely to be somewhat different (except, of course, if your competitive venue is IDPA). There’s an argument to be made—one we endorse—that holster issues shouldn’t be separated from your initial learning/training, but a practical consideration intervenes. The “rig” you’d choose at the start may not be what you’ll need/want further down the road. Sigh. How inconvenient. 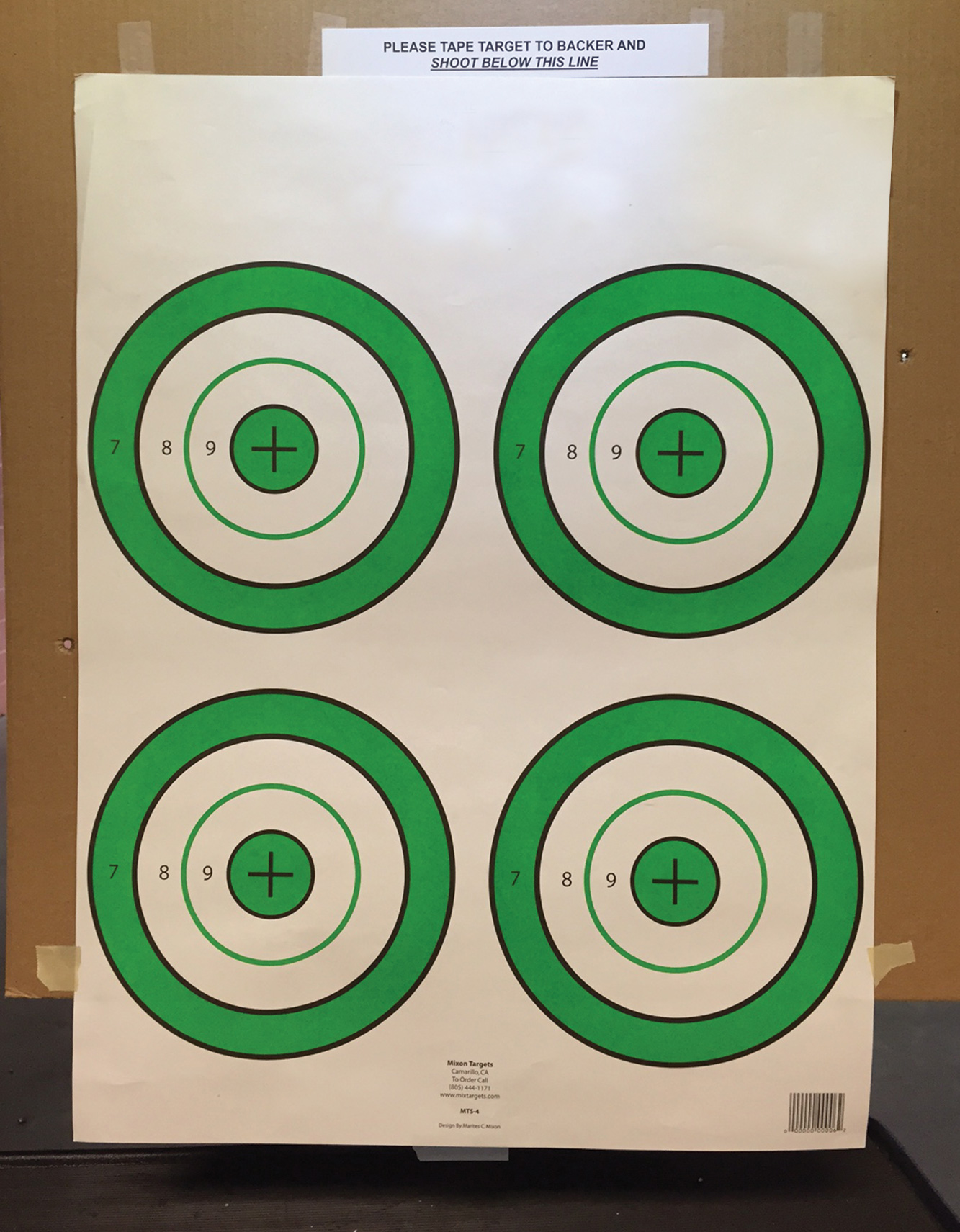 This is better than nothing, but not by much.

Beyond the holster, among the next things to think about as you build out your toolset are target transitions. Simply stated, transitioning is the skill and technique of moving your engagement focus from one target to the next.

It sounds easy, we know. But when you watch shooters try to do it, lots of problems occur. And these problems aren’t just limited to newer shooters. Training indoors, or at a facility that allows only “lane” engagement, further adds to the complexity of learning to transition quickly.

Indoors, there’s a lot more to this than merely tacking up a multiple bulls-eye target. Key problems here are two-fold. One is an orthogonality issue—the propensity of multi-bull targets to “grid” aim points up in mostly 90-degree relationships. This is not a realistic target configuration, and should be avoided. These targets also focus nearly exclusively on visibility of a precise aiming point in poor light. That’s OK for some kinds of practice, but not for transition drills.

Second is the desire to shorten splits as an apparent collateral skill. It’s natural to think that .10-second pairs out of a 1911 are a mark of excellence (~.16 from striker-fired pistols). In a precisely defined way, they are. As a goal, however, in developing useful transition technique, splits don’t mean much. The whole idea of the “double-tap” is in fact counterproductive. In doing so, you are far more likely to unintentionally embed a point-shooting shortcut that will be unhelpful, or even need to be unlearned later—a notoriously difficult process. 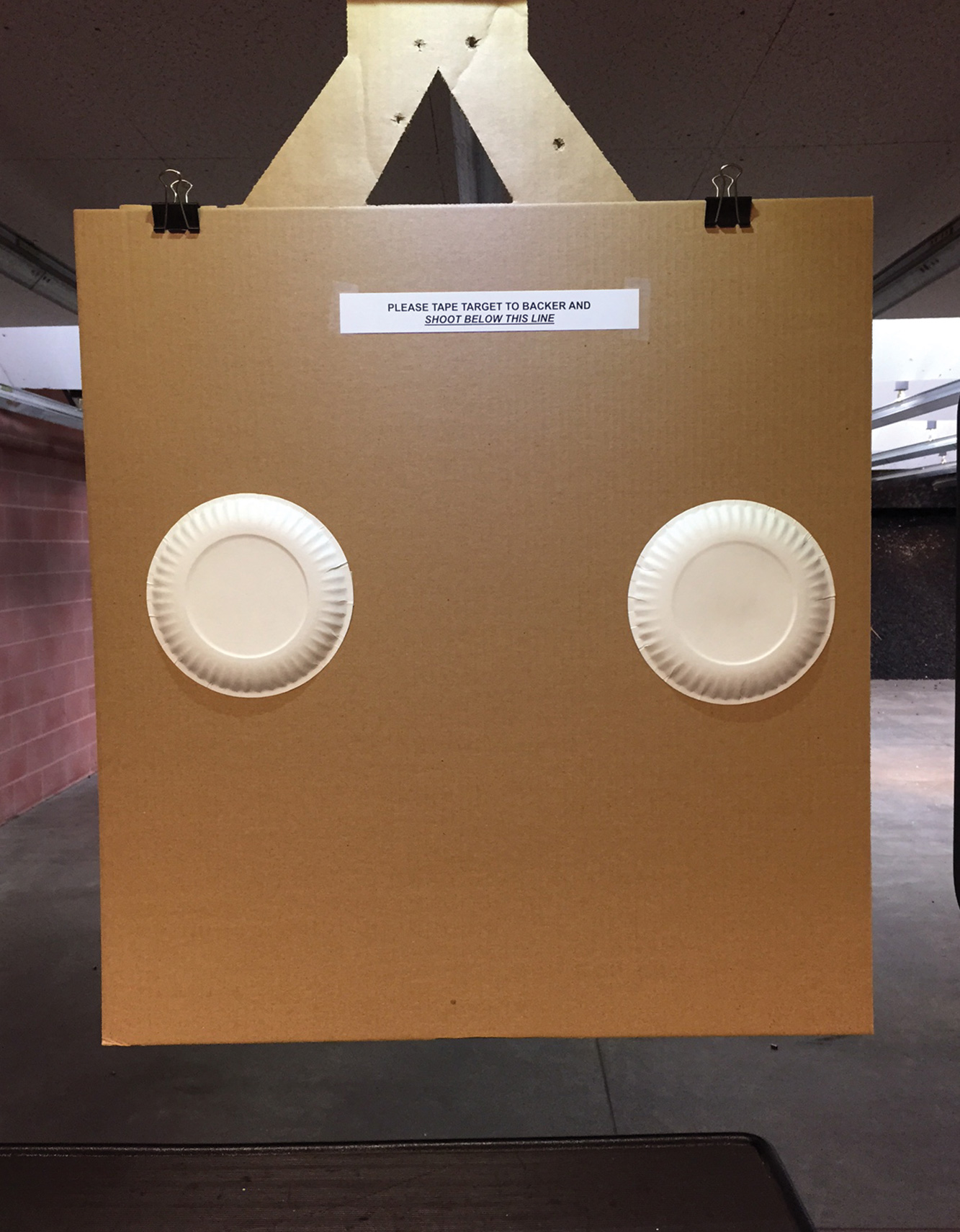 This is easy up close; move it out to get an “edge.”

When you see a truly good transition shooter engage multiple targets, you’ll know it by the report of his or her shots: You won’t need eyes on targets to confirm. Instead of “ba-boom, ba-boom, ba-boom” pairs, you’ll hear “boom-boom–boom-boom–boom-boom.” There will be very little difference in the “split” and “transition” times, and this is the secret of their success.

Three things occur here that are different than usually seen in less-experienced shooters. First (and as we talked about here), these experts are tracking their sights all the way through the recoil cycle—not aiming once and shooting twice (an actual “double-tap”). Next, only when follow-through of the first shot is complete and when the sights are correctly re-aligned do they initiate the second shot. Third, in the instant they send the second (but correctly aligned) shot, their eyes are on the move to the next target, and the firearm is catching up.

So how do you practice this? Outdoors, a plate rack remains one of the best tools to work on transitions, as long as you don’t just go right-to-left (best, in the sense of strongest, for righties) or left-to-right. While there is an obvious orthogonal bias because all the plates are on a single axis, this is overcome by changing order. We like inside out (3,4,2,5,1,6), outside in (6,1,5,2,4,3) or evens/odds, and of course these can be reversed. It’s even better if a training partner calls these for you and you react in real time.

A dueling tree is arguably even better, as it breaks down orthogonality more, but these are still somewhat rare unless you acquire your own (a great one here). “Calling” of engagement order is also a little more complex. But great transition practice can be had all the same. 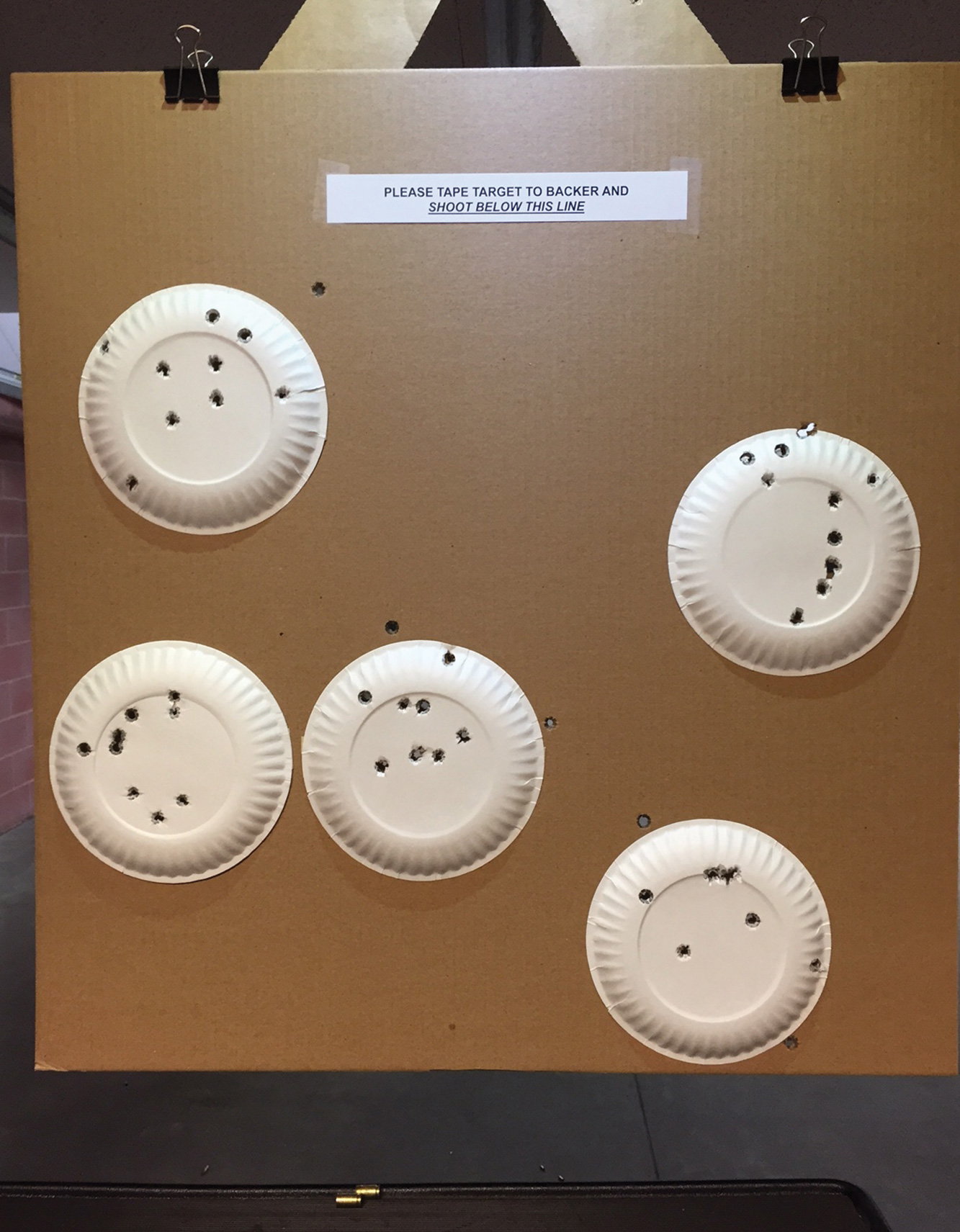 10 strings of five rounds; pretty good workout for a single box of ammunition.

Indoors, or on ranges that enforce “lane” only engagement, working on transitions is a little trickier. We suggest a trip to the grocery store and the acquisition of smallish paper plates (we think 6-inch best, but no bigger than 8-inch plates will do) as the solution. Start with two plates attached to a backer (usually buff cardboard is easiest, and indoor ranges already have/provide these).

If you’re draw-cleared on your range, work from that. Choose engagement strings of varying length and execute them: right-left-right-left-right, for instance, then the reverse. Then try fewer shots, then more. You get the idea. We have a slight preference to odd-length strings, as they break down the embedded pair pattern that so many competitive disciplines ingrain. Distance should be at least 5 yards, but farther than 10 is unnecessary.

Remember the three things we’re after—sight-tracking all the way through recoil, linking of one shot to the next with complete follow-through and re-alignment, and moving on to the next target with the eyes the moment the shot breaks (note that in our single-shot/target regimen, steps two and three merge). In our recommended method, we deconstruct paired shots so that the second shot sight picture isn’t a mere sketch (essentially point-shot based on the first-shot sight picture and subsequent muscle memory), and to practice getting the head moving to the next shot as soon as, and as much as, possible. 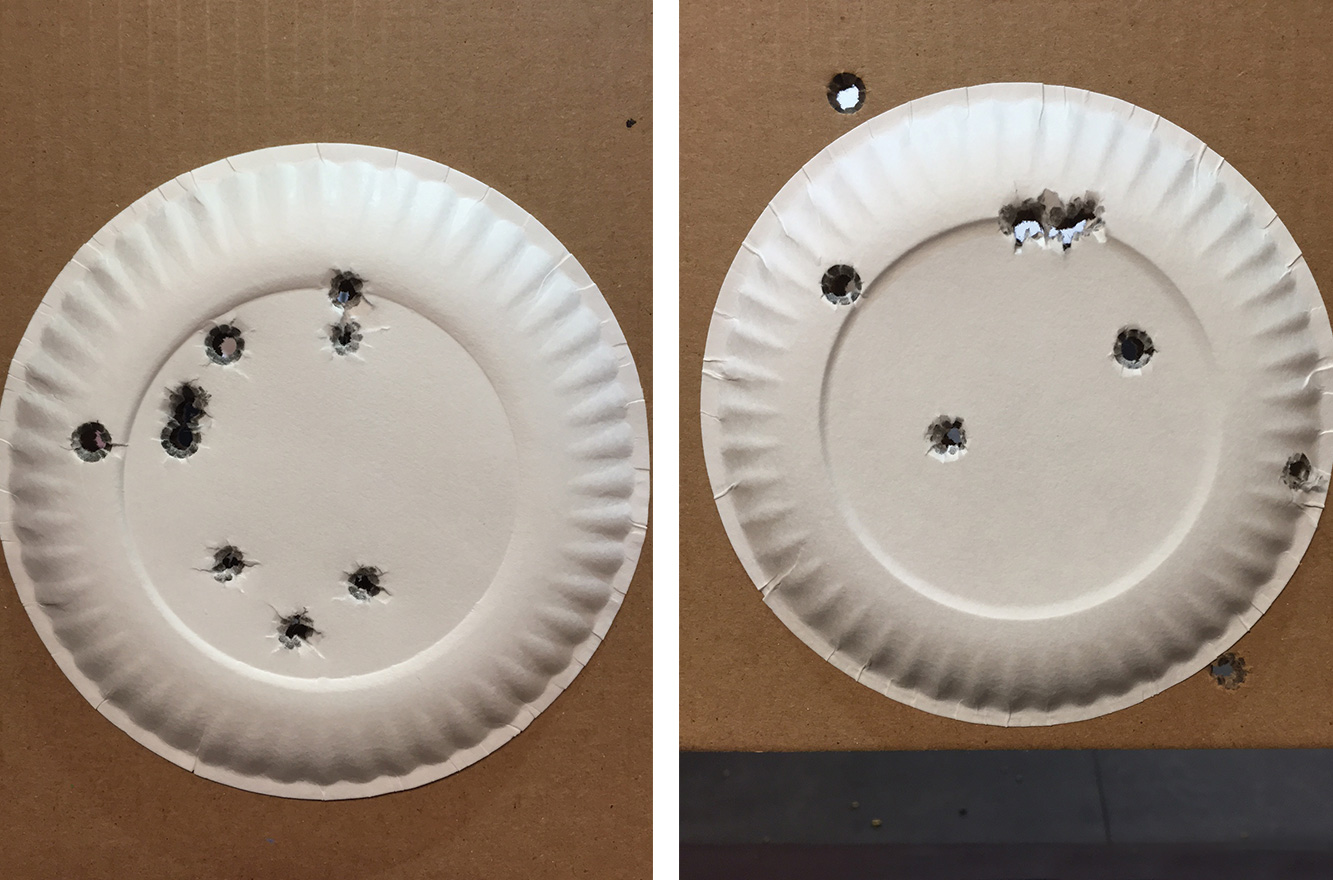 Good vs. Not-So-Good. That’s what practice is for.

If you have a timer, use it. That is how you’ll quantify improvement, though of course you’ll only be measuring transition times at first. As time goes on, we add plates, too. This alleviates the problem of engagement patterns creeping in, as well as the orthogonality issue. Five seems to be the useful/practical maximum.

Unlike some techniques, it’s easy to tell when you’re getting this down, although the real proof appears when you go back to pairs of shots on single targets in an array. Your timer will tell you split times have gone up. If you were fairly fast, say .15, you might be closer to .20 now. Bummer, we know!

Now, though, check those transitions. It won’t be uncommon at all for those to have dropped from the mid .40s to the high .20s. The math, as the saying goes, will out: If you were at .15s, but with .45 transitions, time for six rounds will be 1.35 seconds. With splits at .20 and transitions at .30, elapsed time for the same six rounds is now 1.20 seconds, a more than 10-percent improvement. We leave out draw time in our calculations.

There is a secret to why this works, and here it is: In the cool-guy hurry that we adopt to force a rapid second shot in every pair, we often deeply compromise the first shot of the next pair, and this is what accounts for our slow transition times. By breaking down most of the “pairedness,” we’re not only improving the second shot, but compromising the first shot of the subsequent pair far less (or not at all). This effect compounds at a much faster rate than a few hundredths per split, and accounts for our relatively huge improvement.

Perhaps you’ve already deduced that there’s a silver lining too—one that you didn’t practice specifically for at all. What do you think is the scoring impact for correctly sent second shots, and uncorrupted, subsequent first shots?

Force-On-Force Training: Options & Objectives For Self-Defense | An Official Journal Of The NRA

END_OF_DOCUMENT_TOKEN_TO_BE_REPLACED

The DS Prodigy provides the same magazine capacity as most striker-fired polymer pistols; however, it also provides the familiarity–and much-better trigger–of the 1911.

Increases in violent crime are the result of a number of factors, yet some politicians and media members are blaming lawful gun owners. Here is why.