Exercise Your Freedom You Cant Hit What You Cant See

The decline of visual acuity is an annoying fact of life for all but a very fortunate few. If your (genetic) luck is bad enough, issues have dogged you almost as long as you can remember, though most of us get to 30, sometimes even 40 before we notice any loss. If you’ve reached your second half-century without issue, buy a lottery ticket; it is that rare. Road signs, especially at night, often present the earliest unarguable evidence that vision is changing (and not for the better), but in whatever form the first alert comes, it’s unwelcome on the range, and a continuing slide is all but guaranteed.

Any “eye” guy or lady can give you the nuts and bolts, but vision degradation falls broadly into two categories. The first are optical in the literal, “Sir Isaac Newton” sense of that term: Precise images are the result of precise dimensions within our amazing ojos, and for the most part “de-tune” very slowly over time. The second are on a more apparent—dare we say “mechanical?”—level. Several sets of beautifully coordinated muscles spend the first sixth months (or so) of life coordinating binocular eye movement, up to and including changing the shape of the eyeball at lightning speed as we focus at different distances. Most of us then bumble blissfully along for several decades with the enviable overall acuity of the young. We’re heedless of the annoying degradations time will shortly or eventually inflict, and especially on the speed at which such muscular action occurs.

The first are optical in the literal, “Sir Isaac Newton” sense of that term: Precise images are the result of precise dimensions within our amazing ojos.The upshot is as simple as it is likely: Anteojos—or some surrogate thereof–are in most of our futures.

But while the erosion or corrosion is going to happen, you don’t have to sit idly and take it. Shooters with even slightly compromised vision—no matter their age—have many more options than they likely know. Getting vision issues addressed has pervasive benefits, not the least of which are enjoying shooting more (or perhaps “again”), but also shooting more precisely and effectively if you are ever forced by an aggressor to do so.

The first thing we’d recommend are regular eye exams. Once that 40th trip around the sun passes by, this is easy to remember, as vision changes get more noticeable and irritating. But vision care before that can pay disproportionate benefits too: Like other ailments, eye problems caught early­ may be far more treatable or correctable than late diagnoses.

The benefits for shooting may be disproportionate, too. Small adjustments keep your vision optimized for whatever your discipline is and will let you concentrate on your skills, rather than fighting an uphill battle that you may not even suspect is before you. Don’t be afraid to ask your eye care professional if they understand the special needs shooters face. If you get a blank look, move on. If you ask around your shooting “community,” you’ll almost invariably discover ophthalmologists and optometrists who cater to shooters in particular, and understand their needs and challenges. Why not take your business there, for all the obvious reasons? 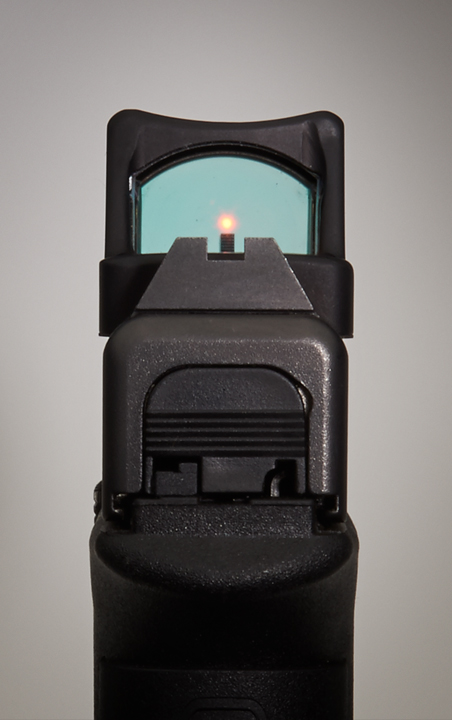 Conventional notch and post with a Trijicon RMR, two technologies on a single defensive pistol. Photo by Michael Ives.

There are a range of solutions that involve eyeglasses alone. Prescriptions have long been used, for instance, to put master/dominant eye focus right at the distance of the front sight. This is an improvement particularly useful to older shooters as it kills two birds with the proverbial single stone: Not only is the crucial sight picture clear again, but the tendency to go from front sight to target and back repeatedly is discouraged in the neuro/optical sense as the target simply won’t be clear anymore. It’s a bad habit anyway, as well as increasingly slow (remember, the muscles that do this aren’t as quick as they used to be). The front sight is what needs to be clear, and we’d argue that it’s easier to avoid or dump this unhelpful back-and-forth habit when the target isn’t.

We know of people who do this with their contacts, too. If yours are set up to give good distance vision in one eye and good reading vision in the other, this is a physical version of what the laser correction (or other surgical methods) call monovision. This depends, of course, on the eyes not having radically different prescriptions. If they do, you may still be able to affect this solution with a second pair of contact lenses. Again, your eye care professional will be the key co-conspirator in this scheme.Optics introduce another set of variables. If you’re using a magnifying optic … make sure you understand what the controls do, and do not do.

Optics introduce another set of variables. If you’re using a magnifying optic—usually on a rifle, and especially it’s a very good and/or high power scope—make sure you understand what the controls do, and do not do.

It’s important to remember that focus is not accomplished in the tube/magnifying optic at all; this is achieved in the old “Mark 1 Eyeball." So if you wear glasses/contacts, wear them when you adjust your scope.

Adjustments on the eyepiece itself are almost always to make the reticle clear and sharp—they don’t focus the scope per se, though proper adjustment will help make the downrange image seem clearer for some. 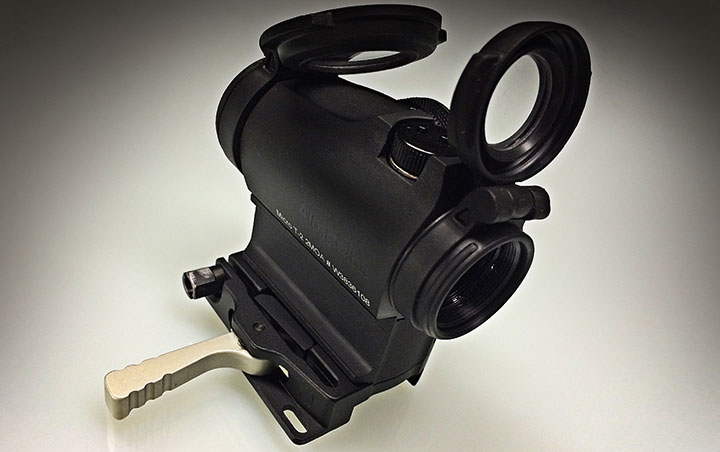 If you have a variable power optic—and virtually all are, these days—the magnification ring is the next adjustment you’ll encounter as you move forward. Pretty much everybody understands this one: As you turn this ring, the target image is magnified. In second focal plane scopes, the reticle does not change size as this adjustment occurs. In increasingly common FFP (or first focal plane), the reticle does change size as magnification increases. Both have their advantages, and we leave that for another time.

The turret adjustments are the same on virtually every tube optic, and like magnification their function is known to most—they adjust reticle position inside the scope tube to make up for the otherwise all-but-impossible task of perfect alignment between the bore and sight axes. Once adjusted for a given bullet at such-and-such a velocity, they may stay untouched for long periods. They have a lot to do with precise bullet strike, but nothing to do with seeing clearly.

Remaining adjustments are usually on the left side of the turret. These are most frequently for parallax—again, not focus, and normally calibrated in yards. This is what leads to their confusion with focus adjustments (of which there are, unhelpfully, a few). These controls adjust the reticle so that it falls on the same visual plane as the target for a given distance, and keeps the reticle from appearing to move over the target if relative eye position changes slightly. Low- and medium-power optics generally have a fixed parallax correction (at 150 yards). Parallax adjustments are generally reserved for high-magnification optics for use at long ranges; only there do uncorrected parallax issues create enough error to become a problem.

These sights solve a host of problems. First, they’re essentially parallax-free, meaning the aiming point appears on top of where the bullet, within ballistic limits, will strike. Next, they don’t require the quite-precise, “centered” head position of either tube optics (rifles or long-range handguns) or Patridge/notch-and-post sights: If the aiming cue is on your target, initiate. Third, they work with distance corrected vision, however achieved—glasses, contacts or surgery.

Last, their technology is available at a host of price points, and is adaptable to nearly any firearm type you can name. (A note here: we’ve had fairly remarkable success with the likes of the Bushnell TRS-25, roughly $100, including mount. Don’t think, however, that it’s nearly the optic this Aimpoint (or here) or this Leupold are in terms of the abuse it will take, or the extra capability the others boast—they’re worth every penny in their own ways.) These aren’t just applicable to relatively delicate range firearms for amusement uses, either: They are also first rate for a host of defensive and competition purposes. You’ll find them in wide use in military and law enforcement applications as well.

So if you’re struggling with sight picture or group size, give serious thought to whether or not it’s your eyes, rather than your birthdays and firearms, that are hampering the exercise of those precious Second Amendment prerogatives.
In this article
Frank Winn, Aimpoint, Eyesight, Leupold

Another State Comes for the Law-Abiding

END_OF_DOCUMENT_TOKEN_TO_BE_REPLACED

From The Editor: Facts Still Matter

As it turns out, facts still matter when debating someone with opposing views.

The NRA and other pro-Second Amendment organizations filed a lawsuit challenging a recently signed Illinois law.

Jurisdictions that embrace the progressive soft-on-crime philosophy that was popularized after a handful of high-profile police-suspect interactions are fueling rising crime rates. American freedom is not to blame for this.

The most-consistent—and likely most-accurate—thing President Joe Biden says about firearms is that he wants to ban them.